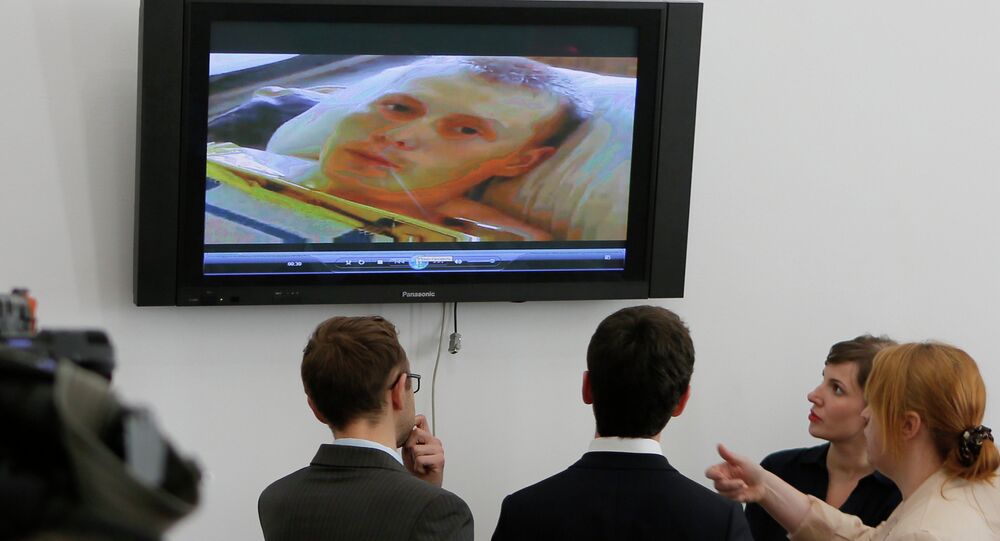 Kiev authorities and Ukraine's media appear to have gotten their wires crossed in their position on the two Russian ex-soldiers captured in eastern Ukraine last month. While Ukrainian media have reported that Russia has "abandoned" the two men, Ukraine's Security Service has been doing its best to prevent Russian officials from visiting them.

On Monday, Markiyan Lubkivsky, an advisor to the head of the Ukrainian Security Service (SBU), commented that the Russian consul in Ukraine will not be allowed to visit Alexander Alexandrov and Yevgeny Yerofeyev, two Russian ex-military personnel captured in the Lugansk region in mid-May, for at least a month or two, following the meeting which took place May 26.

"Given the significant amount of work to be done by investigators, as well as the importance of the medical rehabilitation of the prisoners, who have been granted full medical assistance, the Russian consul will not be allowed to visit them for a month or two following his last visit," Lubkivsky stated.

The SBU official's commentary about the decision on Kiev's part to restrict Russian officials' contact with the men contradicts repeated claims by Kiev and by Ukrainian media that Russia has "abandoned" the ex-soldiers. As recently as Monday, Ukrainian news hub Glavpost stated that the "Russian intelligence officers" had been abandoned, noting that they were "disowned by the Russian Ministry of Defense the very next day after the incident."

© Sputnik / Maxim Blinov
Diplomatic Mail With Kiev Disclosed to Prove Request to Meet With Detained Russians
Last week, the SBU itself had publically claimed that Ukraine had not received an official request from the Russian Foreign Ministry to meet with the two captured Russian citizens. For their part, Russian officials refuted the claim by simply disclosing the letter they had sent to their Ukrainian counterparts on May 19 requesting the meeting.

Alexandrov and Yerofeyev, wounded and taken prisoner near the frontline town of Shchastia in the Lugansk region last month, have been accused of being active-duty personnel in the Russian armed forces. They have been charged with terrorism, and face sentences of 15 years to life if convicted. The ex-servicemen's relatives, including Alexandrov's wife and Yerofeyev's father, have declared that their loved ones had left the army between December and January, and that their confessions to Ukrainian media were obtained under duress.

For its part, the Russian Foreign Ministry has repeatedly demanded the speedy release of its two nationals.

© AP Photo / Dmitry Lovetsky
Moscow to Seek Speedy Release of Russians Arrested in Ukraine - Lavrov
Russian officials have never denied the presence of Russian volunteers in the conflict zone in eastern Ukraine, but they have repeatedly rejected Kiev's claims that Russia had carried out a full-blown invasion of the country. Last month, Ukrainian President Petro Poroshenko once again stated that nearly 11,000 Russian troops were deployed in Donbass, a claim which Russian Foreign Minister Sergei Lavrov called ludicrous, given that Kiev's US allies, "with all their technological capabilities, have so far failed to show any real, convincing and concrete proof." Over the course of the conflict, Kiev and its allies have repeatedly found themselves entangled in embarrassing situations after claims of proof of Russian military involvement turned out to be false reporting, images 'borrowed' from other conflicts, or claims by officials without any follow-up evidence to back them up.
...
Reddit
Google+
Blogger
Pinterest
StumbleUpon
Telegram
WhatsApp
105