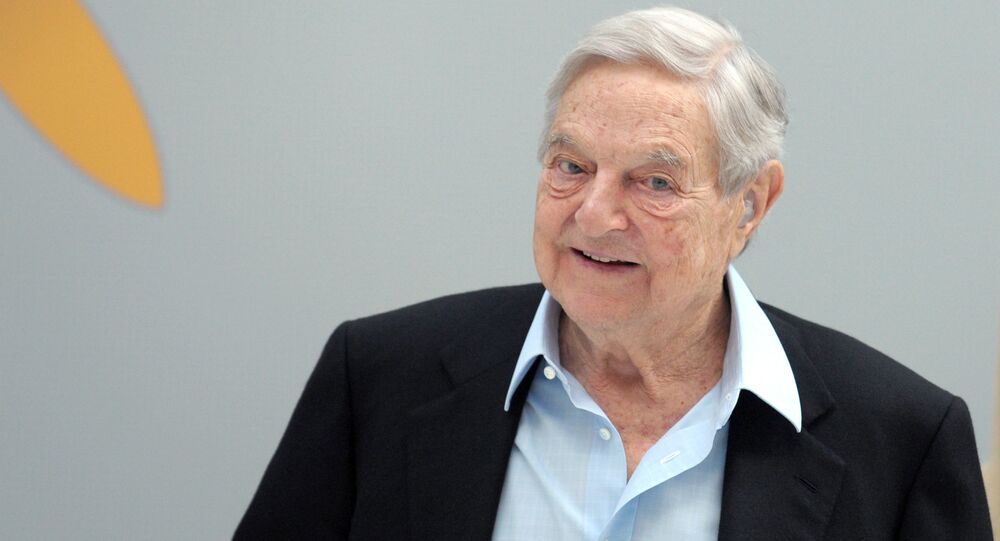 A leak by the hacker group CyberBerkut revealed an internal paper allegedly written by George Soros, which plans to make the European Union underwrite political risks for investors in Ukraine.

A draft internal discussion paper allegedly written by investor George Soros in March was leaked by the hacker group Cyber Berkut on Monday.

The paper outlines George Soros' alleged plan to use the European Union's credit rating to finance risk insurance for his investments in Ukraine through its own budget and debt. The plan would effectively make the EU underwrite Ukraine's political situation at a cost of up to 11 billion euros ($12 billion) every year.

Once the risk insurance is available, Soros would allegedly invest up to $1 billion in Ukraine's private sector. The sum is relatively minor when compared to loan packages negotiated for Ukraine, with the last IMF bailout amounting to $17.5 billion.

Ukraine's military conflict in the Donbass and its diplomatic conflict with Russia is mentioned at the beginning and the end of the paper as a justification for the strategy. According to the paper, they are ideas that "Ukrainian and allied leaders should agree on" to support Soros' alleged plan and do not appear to be his actual appraisal of the situation.

Both the means Soros allegedly lists to provide the insurance and the means to profit from the situation rely on perception rather than what the paper calls "deteriorating external reality." While saying that it is important to show Ukraine as a country that is not corrupt, Soros himself allegedly shows little concern for transparency when talking about Ukraine's constitutional reform.

"The process has been slowed down by the insistence of the newly elected Rada on proper procedures and total transparency," the paper says.

The paper says that the government must "produce a visible demonstration" of Ukraine as a country that is not corrupt within three months to get the EU to provide the investment guarantees. Soros allegedly intends to create this demonstration through his initiatives, such as the National Reform Council, a body organized by presidential decree which allows the Ukrainian president to push bills through Ukraine's legislature.

Once Ukraine's image as a country which is not corrupt is temporarily secured, Soros allegedly plans to secure the EU's Macro-Financial Assistance (MFA) program by getting the European Council to approve it through unanimous consent. That would allow the EU to grow its allocations to Ukraine in the next budget from 1 billion euros to 11 billion euros, according to the paper.

© REUTERS / Ruben Sprich
George Soros Believes 'New Ukraine' is a Model for European Union
The second part of Soros' alleged plan is to create a "surprise to the business community" by announcing the insurance scheme and his plan to invest $1 billion, with the hope that more investors will follow through with the remaining $10 billion of insurance.

Ukraine's two leading stock exchanges currently have market capitalizations of $10.7 billion and $5.7 billion, which would allow Soros' investment to have a good chance of a high return in the short term.

"The investments will be for-profit but I will pledge to contribute the profits to my foundations. This should allay suspicions that I am advocating policies in search of personal gain," the paper says.

What Would Soros Invest In?

Other than Ukraine's fledgling equities markets, which lost 15.5 percent in the past year, Soros could profit from the Ukrainian government's privatization plans.

"The centerpiece of economic reforms will be the reorganization of Naftogaz and the introduction of market pricing for all forms of energy, replacing hidden subsidies with explicit subsidies for needy households," the paper says.

© Sputnik / Ilya Pitalev
Ukraine is Head Over Heels in Debt for Russian Gas
Splitting Naftogaz into separate companies, as the Yanukovych government also planned as part of an agreement with the EU, could allow Soros to take control of one of the new branches and essentially privatize its profits.

The paper also discusses using EU money in Ukraine for other initiatives, which are not disclosed.

"Using MFA for purposes other than balance of payments support and using it to make political risk insurance commercially attractive runs into a number of legal hurdles that need to be overcome in the next three to five months," the paper says.