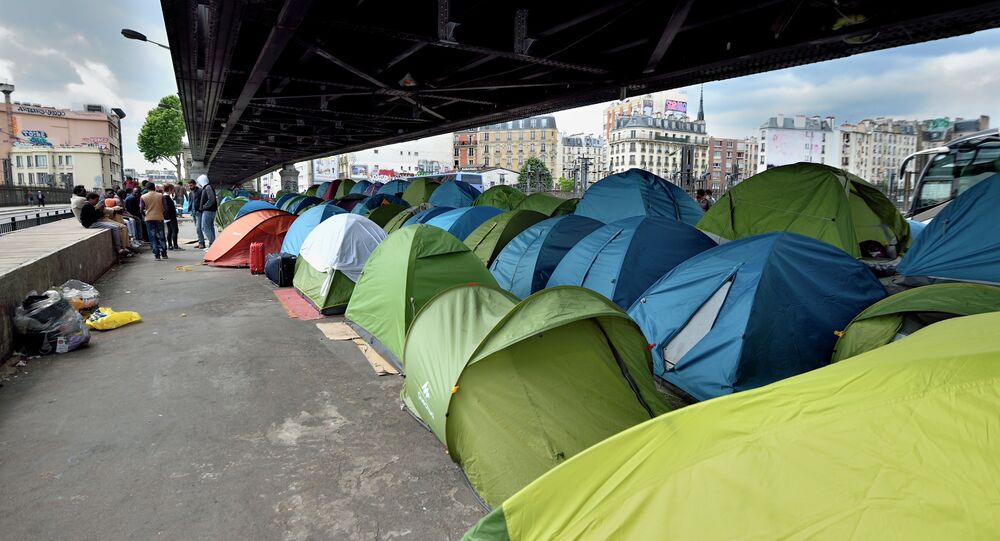 French and German interior ministers Bernard Cazeneuve and Thomas de Maiziere stressed that the European Commission must reconsider its quota plan for refugees.

On Wednesday, the European Commission urged the bloc’s members to take in 40,000 people fleeing Syria and Eritrea to Italy and Greece. The refugees would be redistributed across member states using quotas based on a country's gross domestic product, unemployment rate and the size of its documented immigrant population. Earlier, the commission suggested taking in another 20,000 migrants to the EU over two years.

"At the moment, 75 percent of those who applied for asylum are planned to be redistributed among five European countries – France, Germany, Sweden, Italy and Hungary," the statement said.

© AFP 2020 / PHILIPPE HUGUEN
Dozens of Undocumented Migrants Fight at Calais Camp in France
According to the ministers, the existing mechanism can only be temporary and viewed as a part of what needs to become a global approach to the issue.

Europe is currently struggling with a spike in undocumented migration, as thousands of migrants fleeing conflicts in North Africa and the Middle East attempt to reach European coasts via the Mediterranean Sea.

According to the United Nations, some 60,000 people have tried to cross the Mediterranean this year. More than 1,800 migrants died at sea while attempting to reach Europe in 2015.