Berlusconi Accidentally Shows Up at Opposition Election Rally Outside Milan

Former Italian Prime Minister Silvio Berlusconi accidentally showed up at a campaign rally for a local mayoral race, asked the name of the candidate, and encouraged people to vote for him, all before realizing that he had accidentally come out in support of his party's political opponent, Italian media have reported.

Berlusconi arrived at a campaign rally in the town of Segrate, a few kilometers northeast of Milan, on Friday evening, mistakenly believing that he had arrived at the rally for the candidate from Forza Italia.

After walking around the square for a few minutes, Berlusconi asked someone to tell him the name of the candidate, and then proceeded, to the awe of the crowd, to encourage people to "Vote Paolo," who turned out to be Paolo Micheli, the candidate with the backing of Italy's current ruling center-left Democratic Party. "Young people, I'm counting on you to vote Paolo," Berlusconi blurted, before being informed by a member of his entourage that he had made a mistake.

Berlusconi appeared to have gotten lost while looking for the rally of Tecla Fraschini, who was holding a similar campaign event at a nearby hall.

Micheli playfully reacted to the former PM's 'support' on his Facebook page, noting that "with the support of Il Cavaliere [Berlusconi's longtime nickname, meaning 'The Knight'] I can say I've won." 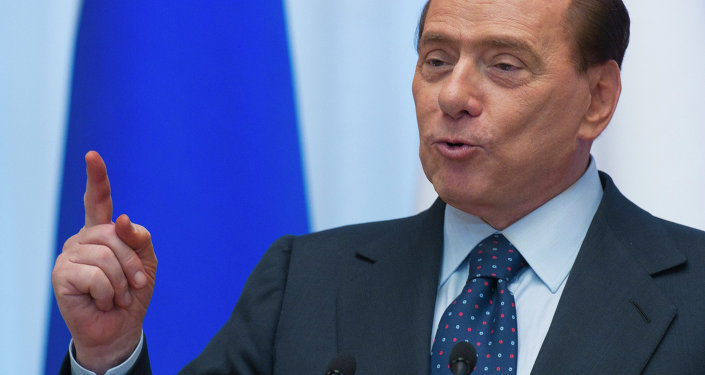 © Sputnik / Sergey Guneev
Berlusconi: Italy’s PM Must Resign If Center-Right Succeeds in Elections
Italians in seven of Italy's 20 regions are set to go to the polls Sunday to elect new governors, as well as mayors in more than a thousand cities, towns, and municipalities.

Berlusconi, 78, has served as prime minister three times between 1994 and 2011. He had announced plans for a political comeback earlier this year, but remains banned from running for office following a series of trials and allegations leveled against him, from underage sex and abuse of office to corruption and illegal party financing.

Berlusconi: Italy’s PM Must Resign If Center-Right Succeeds in Elections

Romano Prodi: Isolation of Russia Does Nothing But Harm to EU