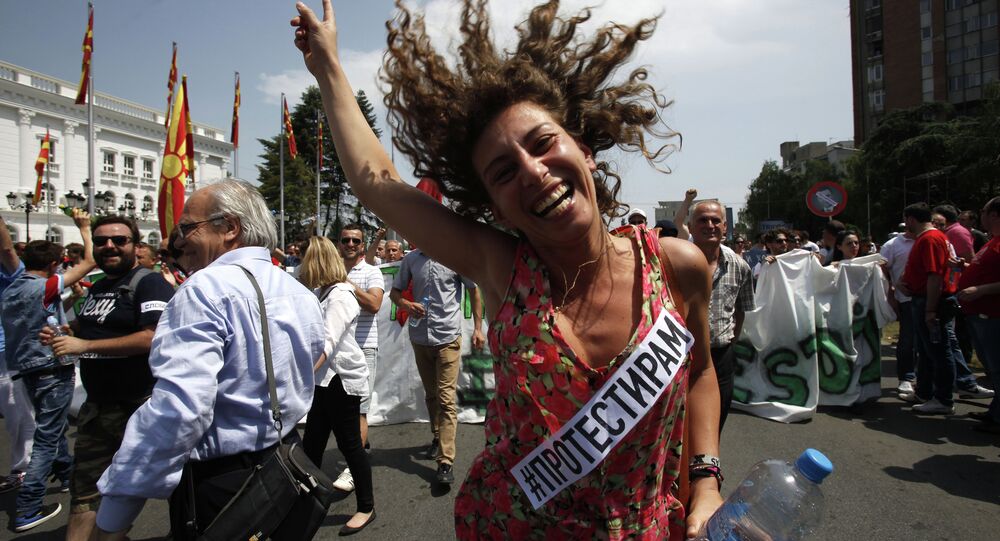 The wave of “color revolutions,” launched from the outside, has reached Macedonia, Russian Deputy Defense Minister Anatoly Antonov said Saturday.

© REUTERS / Boris Grdanoski
Macedonia Unrest: West Giving Balkan Country a Lesson of 'Democracy'
SINGAPORE, May 30 (Sputnik) – The "color revolutions" were a series of regime changes caused by protests in several post-Soviet republics in 2000s. The concept has also been used to describe the revolutions in the Middle East countries during the Arab Spring protests that broke out across the Middle East in 2010-2011.

“The epidemic of ‘color revolutions’ that earlier struck the Middle East swept away like a hurricane entire states in the region,” Antonov said at the Shangri-La Dialogue security conference in Singapore Saturday.

He added that the “disease” has affected some European countries as well.

“We are witnessing the unrest in Macedonia, outrageously orchestrated from the outside,” Antonov pointed out.

Over recent months, violent political protests have been held in Macedonia, with numerous reports of civil rights violations.

Earlier this month, crowds of people took part in an anti-government corruption and police brutality demonstration in the Macedonian capital Skopje, organized by the Social Democratic Union of Macedonia, led by Zoran Zaev.

He urged the protesters not to leave the streets until current Macedonian Prime Minister Nikola Gruevski steps down.

A group of protesters has set up a tent camp outside government buildings in central Skopje.