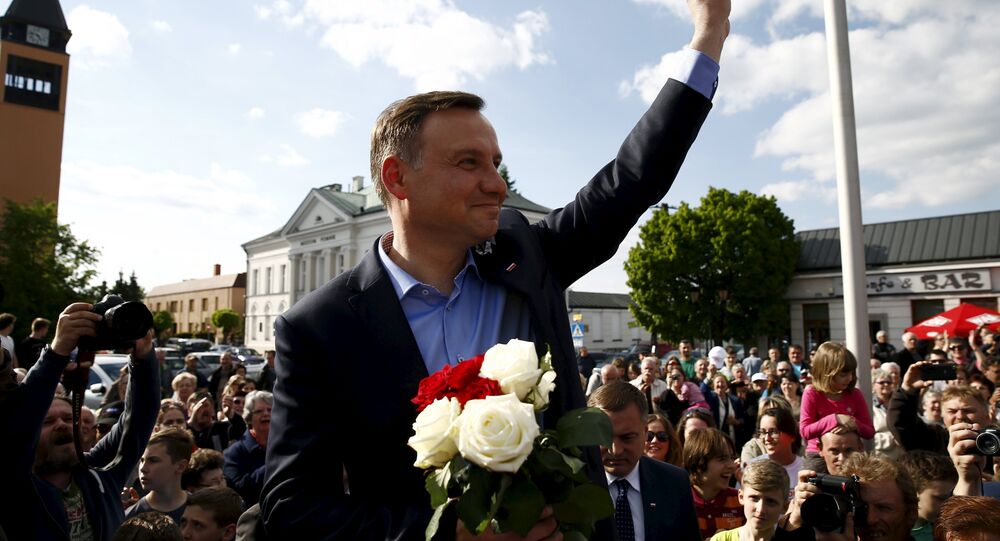 Poland's incumbent president has been a strong supporter of the European Union, particularly on the issue of Ukraine, while Duda is a mild euro-sceptic.

Komorowski later conceded defeat and congratulated Duda with victory in a speech given from his campaign headquarters.

Komorowski, 62, was ahead of Duda, 43, in pre-election ratings released earlier this week, but on May 10, Poland's incumbent leader narrowly lost to the opposition candidate in the first round of the elections that triggered Sunday's run-off.

© REUTERS / Pawel Kopczynski
Poland's incumbent President and presidential candidate from the Civic Platform Party (PO) Bronislaw Komorowski shouts to supporters as he leaves his election campaign headquarters after the announcement of the first exit polls in the second round of the Polish presidential elections, in Warsaw, Poland May 24, 2015

Sunday's turnout was estimated at 56.1 percent.

Poland's State Election Commission is expected to announce official results on Monday, May 25.

Donald Tusk, a Polish politician and President of the European Council, has congratulated Andrzej Duda with victory in Poland's presidential election.

"I thank President Komorowski for a good and fair presidency, and I congratulate Andrzej Duda with his victory and wish him the best term," Tusk said in a Sunday post on his official Twitter page.