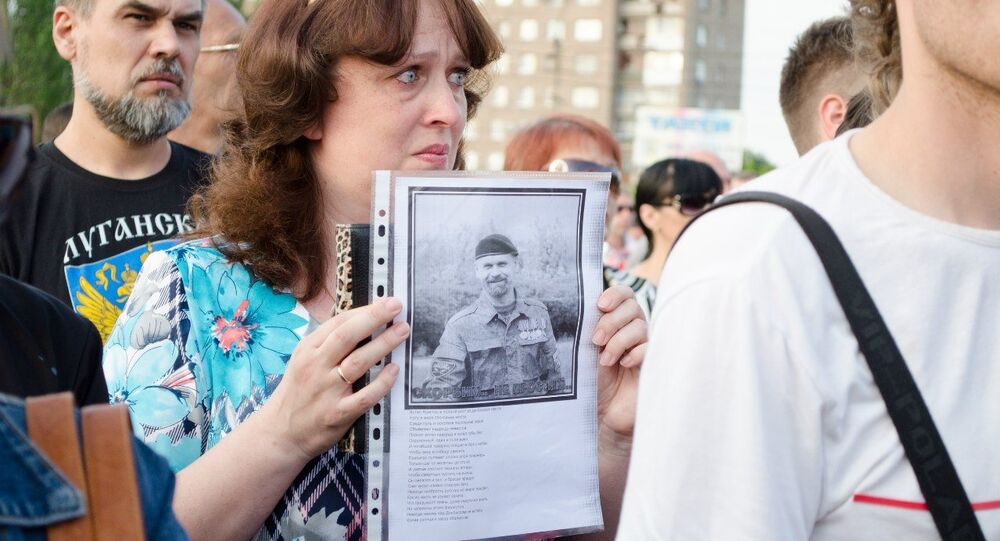 The town where late militia leader Aleksey Mozgovoi's Prizrak Brigade is headquartered mourned his passing on Sunday, as an investigation into his assassination mounts.

Around a thousand mourners came to honor assassinated militia commander Aleksey Mozgovoi in Alchevsk, where his Prizrak (Ghost) Brigade militia was headquartered on Sunday.

Relatives, fellow militia members and friends spoke at a microphone at the event, expressing their grief and condolences.

© Sputnik / Yuriy Lashov
Prominent Lugansk Militia Leader Mozgovoi Assassinated
Mozgovoi was assassinated in an ambush on Saturday after he and four others drove onto a landmine and were then attacked by gunmen. Two civilians passing the ambush site in their cars were also killed by the gunmen. Investigators from the self-proclaimed Lugansk People's Republic have said that there are several suspected motives including local organized crime groups and a Ukrainian saboteur group.

"As a commander of the Prizrak Brigade, Alexei Mozgovoi several times said that he will mercilessly fight organized crime in Alchevsk, for which he received many threats from various criminal elements," a source in the investigative group told Russian new agency Interfax on Saturday.

Denis Pushilin, a representative of the self-proclaimed Donetsk People's Republic at the Minsk talks said that he believes that the murder was an attempt to destabilize the Lugansk republic.

"This was a calculated attempt to destabilize the situation from the inside. We all knew and witnessed Mozgovoi's complicated relationship between the republic's leadership. However, they always found a common language, and naturally, it would have been pointless to resort to any methods for such a solution," Pushilin told RIA Novosti.

© REUTERS / Alexander Ermochenko
Kiev to Inform UN of Its 'Freedom' to Ignore Human Rights in Donbass
A mysterious pro-Kiev militia group called "Teni" (Shadows) took responsibility for the assassination, but provided a conflicting account of its actions. Although the group's leader has been repeatedly featured in Ukrainian media, the group's actual existence is unconfirmed.

A representative of the Ukrainian Presidentian Administration, Oleksandr Motuzyanik, claimed that the assassination was an issue of militias' "internal strife."