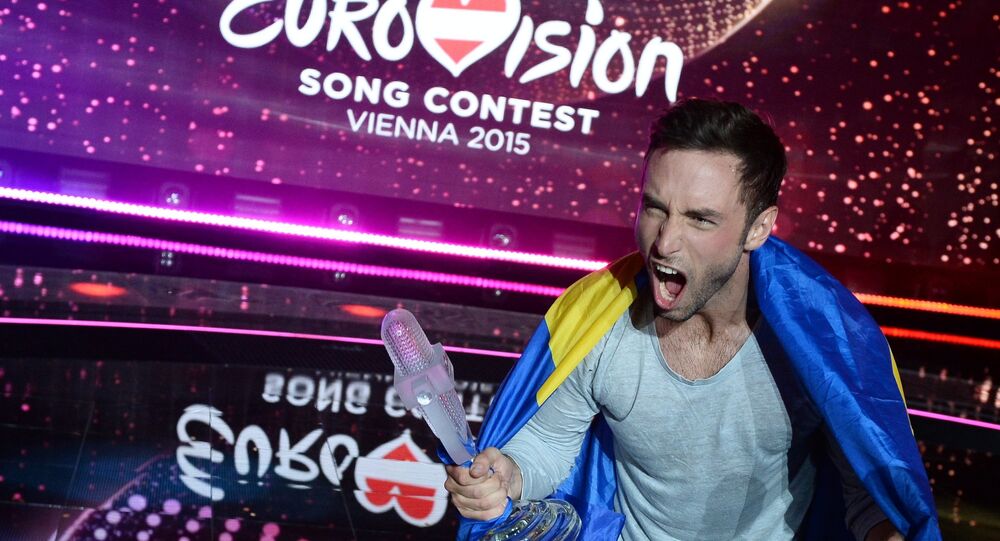 The Eurovision Song Contest has long been criticized for its politically motivated voting, with the participants using the voting system to support allies, strengthen regional blocs and punish their neighbors; recently, however, another criteria has been introduced to this volatile mix – homosexuality, and Russia had no chance of winning.

Russia had no chance of winning the 2015 Eurovision Song Contest due to its law banning propaganda promoting nontraditional sexual relations among minors, according to the Washington Post, Wall Street Journal and other sources.

“Eurovision fans were constantly reminded, in ways big and small, of Russia’s anti-gay propaganda law, and Polina Gagarina, the songstress representing the country, probably never had a chance because of it,” says the author of the Washington Post Style Blog.

“In recent years, the contest has become a byword for tolerance and diversity,” echoes The Wall Street Journal.

© AP Photo / Kerstin Joensson
Conchita Wurst, who won the 2014 ESC for Austria, right, talks to Polina Gagarina representing Russia during the final of the Eurovision Song Contest in Austria's capital Vienna, Sunday, May 24, 2015

The Style blogger, however, admits that “Eurovision is all about political voting, even as it tried its best to emphasize its 'Building Bridges' theme and encourage meritocratic voting."

The Telegraph has even come up with a navigation guide to political voting.

The newspaper explains how over time, the contest has proven to become an interesting microcosm of international relations within Europe.

It has made an interactive map and diagrams illustrating “who votes for whom, and what does it all mean”.

© AP Photo / Kerstin Joensson
Polina Gagarina representing Russia, centre, reacts as the results start to come in during the final of the Eurovision Song Contest in Austria's capital Vienna, Saturday, May 23, 2015

“While these aren't exactly Game of Thrones-style warring factions, certain groups of countries tend to score each other’s acts favorably on the night, and are therefore known as voting blocs,” it says.

The Balkans – the countries of former Yugoslavia, as well as Romania and Albania.

The former Soviet Union and its 'satellite states' in Eastern Europe

"Would ABBA have been quite so successful if they couldn’t rely on points from Finland and Norway?" it questions.

“While it seems clear that countries vote positively for their neighbors, this doesn’t necessarily mean that other European countries, such as those in the West, are being actively discriminated against. Statisticians from UCL and Imperial College found that no country systematically gives another low points,” it concludes.

Taking into consideration all the above, Russian performer Polina Gagarina being voted second best comes even more valuable than an actual victory.

Interestingly enough, according to Ukrainian website 1tv.com.ua, the Ukrainians, who have not sent their singer this year, have also put Polina as second best, slightly below the Estonian contesters and above Sweden's Mans Zelmerlow.