The Czech Republic decided to launch a reality show featuring a family trying to experience what it was like living during the Nazi occupation of their country during WWII, but critics say while the series recreates “some inconveniences of the war” it fails to replicate the actual horror of the WWII – “a possibility of violent death for everyone.”

Czech TV producers have launched a reality show, "Holiday in the Protectorate," in an attempt to recreate daily life in 1939, in a country whose fate was being determined and decided by Nazi Germany.

The Czech public broadcaster said the family members, chosen from 400 applicants, were brought back in time to March 15, 1939 — the day Hitler's troops took over the country.

© Photo : ceskatelevize.cz
Holidays in the Protectorate

They were taken to a farm in the mountains in eastern Czech Republic, kitted with furniture from 76 years ago, and made to confront the everyday realities of the occupation: from "milking cows to interrogation by the Gestapo," according to the official website of the show. 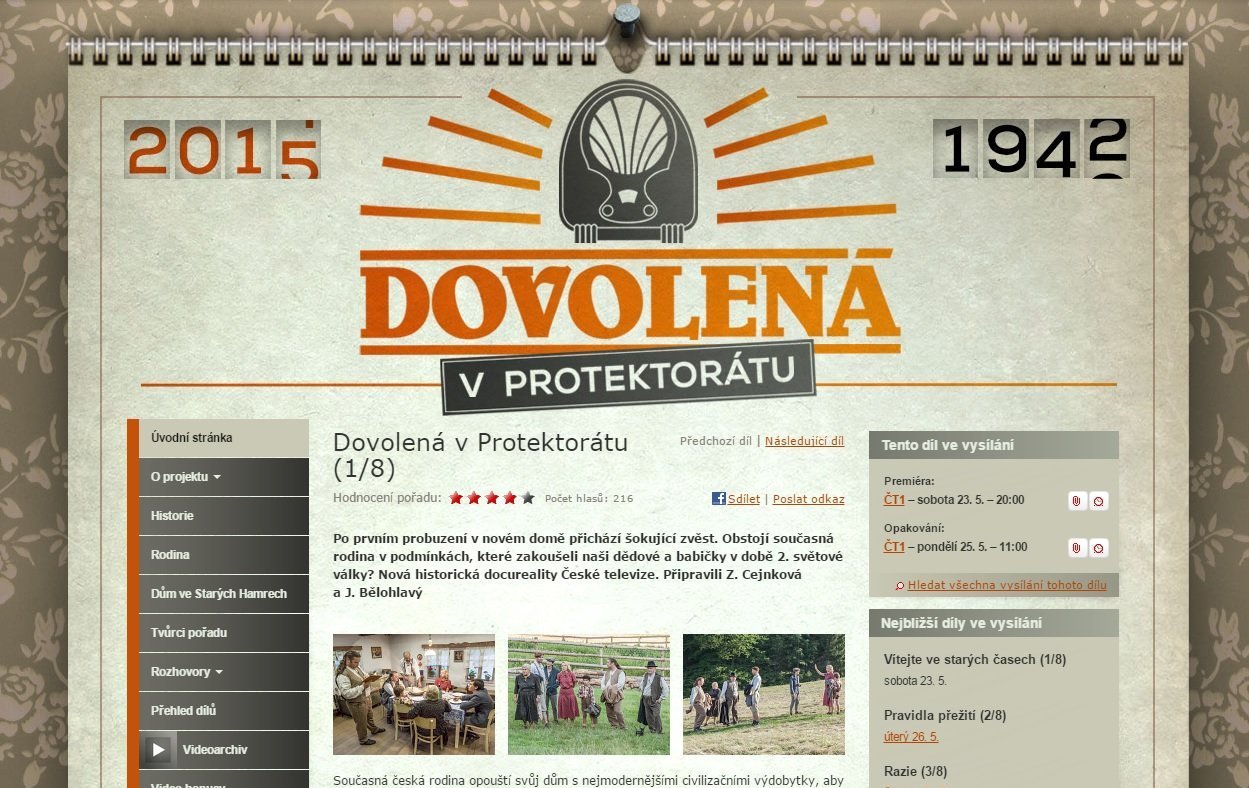 ceskatelevize.cz
TV-show in the Czech Republic

The goal, the producers claim, is to show what common people had to go through at the time, and historians and architects have made sure their experience was as authentic as possible.

The eight one hour-long episodes are overseen by an appointed "war cabinet" consisting of two historians, a psychologist, and an architect, who are in charge of making the show as realistic as possible.

The idea, however, has already been widely criticized.

“The point about the World War II period is that there was always a possibility of violent death for everyone, something that is impossible to replicate artificially," the media quotes Jan Kral, a car designer, as saying.

"'Holiday in the Protectorate' recreated some inconveniences of the Nazi occupation, but the real fear was death. The show replicates wartime living the way a Formula One computer game replicates being Michael Schumacher — you get everything except the risk."

© Photo : ceskatelevize.cz
Holidays in the Protectorate

The winner is supposed to get a "valuable prize"; the organizers, however, haven't specified what it will be. Some media sources however suggest it will be 1 million Czech Korunas paid in golden coins ($40,000).

The open historic sources offer a very detailed account of how Hitler took over the country 76 years ago.

“At 3:55 a.m., Wednesday, March 15th, [1939] the Czech president signed the document stating he had "confidently placed the fate of the Czech people and country in the hands of the Führer of the German Reich," recalls the website “The History Place”.

Two hours later, amid a late winter snowstorm, the German Army rolled into the first non-Germanic territory to be taken by the Nazis.

"Czechoslovakia has ceased to exist!" Hitler announced to the German people later that day, just before departing for Prague. That evening, Hitler made his long-awaited entry into the grand old city at the head of ten vehicle convoy.

© Sputnik /
On the streets of Prague

The next day, Thursday, March 16th, from inside Prague Castle, former home to the Kings of Bohemia, where he spent the night, Hitler issued a proclamation establishing the Protectorate of Bohemia and Moravia.