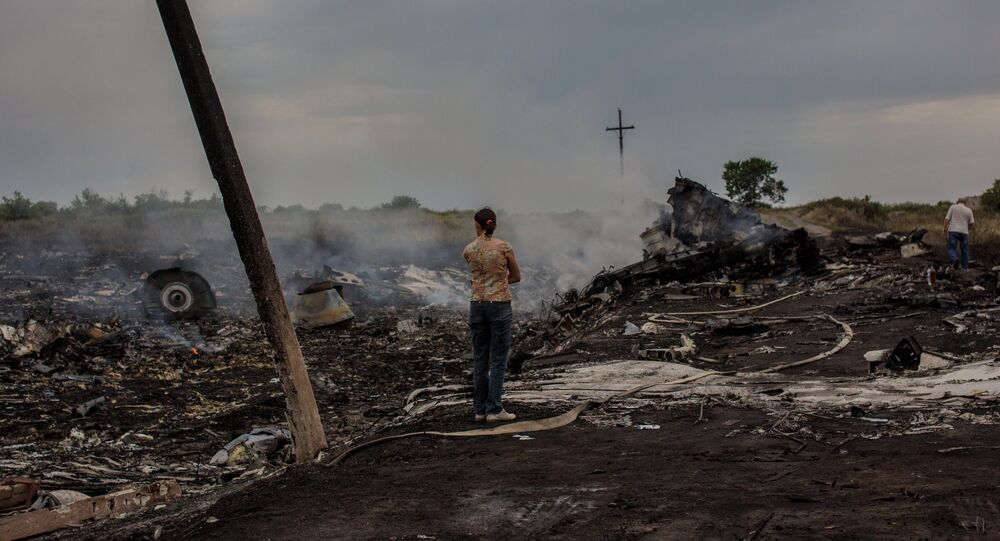 Dutch blogger Max van der Werff explained to Sputnik why he decided to carry out his own investigation into the origin of two controversial photos which circulated on social networks shortly after the MH17 crash, purporting to show a trail of smoke in the sky from a missile launcher, and what his inquiry uncovered.

Unlike the majority of people who have either accepted or rejected the authenticity of the two photos that were published online, Dutch blogger Max van der Werff made it all the way to Donbass to see for himself where the photos were allegedly taken.

“Reading "The Grand Chessboard" by Brzezinski it becomes clear why, for the USA, Ukraine is important as a geological hotspot to contain Russia,” he told Sputnik.

“On July 17, a few hours after the MH17 crash, it was clear to me this tragedy would be abused and milked over and over again to demonize Russia and its president in particular,” he added.

Logical Buk routes from Snizhne to Krasnodon. Why on earth would rebels smuggle it back to Russia via Lugansk? /3/ pic.twitter.com/IQfWMqZyci

“As a logical consequence, I follow everything that has to do with this issue and try to make up my own mind if things presented as facts really are. I notice that often completely unfounded assumptions are presented as fact in the media.”

Max van der Werff explained that he is Dutch citizen and in a single day his country lost almost 200 people in the crash. MH17 would have never been shot down if there was no civil war in Ukraine.

“Fifteen years ago, August 1999, I traveled for the first time to Ukraine. Just after the NATO bombing of the former Yugoslavia by NATO. My analysis was that Ukraine would become one of the next areas of confrontation,” he added.

The blogger went all the way to Donbass, took footage of the roof from which the anonymous photographer claimed to have taken the picture, and then proved the image is fraudulent, since the view from the roof does not match that of the photo.

Van der Werff's conclusions also correspond with other doubts over the veracity of the photos, raised because the relatively clear weather conditions shown on the photo do not match those reported on the day of the crash, when the sky was overcast.

© Photo : Twitter / WowihaY
No Smoking Gun: Investigation Casts Doubt on MH17 Buk Missile Trail Photos
The blogger spoke to people who know the supposed photographer and says their reaction is not that of anger but rather regret that he had chosen to support the new regime in Kiev.

“I would say they are not angry at him. Rather disappointed. Especially one of his former classmates who joined the rebel force.”

Van der Werff also explained that it is almost impossible for a Western journalist to not report in line with the anti-Russian sentiment.

The mantra is "nothing-against-Russian-but-against-dictator-Putin."If you have a different view, you're weeded out by the gatekeepers.

He rather advised to follow Karel van Wolferen, a Dutch journalist, writer and professor.

© Sputnik / Andrei Stenin
Creative Lie-cense: Reuters Accused of Faking MH17 Testimony
“In much of the European Union the general understanding of global reality since the horrible fate of the people on board the Malaysian Airliner comes from mainstream newspapers and TV which have copied the approach of Anglo-American mainstream media, and have presented ‘news’ in which insinuation and vilification substitute for proper reporting,” Van Wolferen wrote in one of his articles.

“Respected publications, like the Financial Times or the once respected NRC Handelsblad of the Netherlands for which I worked sixteen years as East Asia Correspondent, not only joined in with this corrupted journalism but helped guide it to mad conclusions.”

“The punditry and editorials that have grown out of this have gone further than anything among earlier examples of sustained media hysteria stoked for political purposes that I can remember. The most flagrant example I have come across, an anti-Putin lead in the (July 26) Economist Magazine, had the tone of Shakespeare’s Henry V exhorting his troops before the battle of Agincourt as he invaded France.”

Mr van der Werff concluded by summarizing how Western media works, "So, it is not a conspiracy. It is just how peer pressure works."