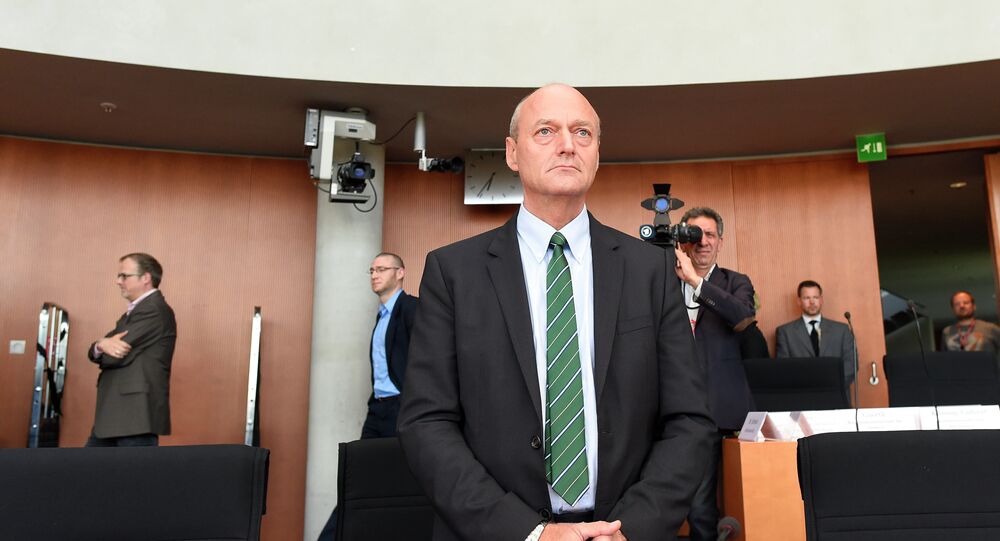 BND Chief Gerhard Schindler told a parliamentary enquiry on Thursday that Germany's dependence on the NSA led to a series of errors on the part of the BND, allowing the NSA to spy on European officials and commercial organizations.

© Sputnik / Anton Belitsky
NSA Planned to Use Google App Store to Launch Massive Spy Campaign
The head of the German Federal Intelligence Service [BND] told an investigative committee of the Bundestag that the agency allowed the NSA to gain access to sensitive information unchecked for years, but defended the cooperation with the US spy agency, saying that "we need the cooperation with the US."

The inquiry was launched after it emerged in mid-April that Germany's foreign intelligence service BND had assisted NSA in spying on high-ranking European officials and corporations.

"The review of the selectors [search items requested by the NSA] was incomplete from the outset," said the spy chief of the collaboration between the NSA and BND, which began in 2005.

Selectors requested by the NSA included phone numbers or email or IP addresses, which were then used to conduct surveillance from the BND facility in Bad Aibling, close to Munich.

Schindler told the hearing, held in the Bundestag on Thursday, that the BND did not carry out any comprehensive check on the selectors being requested by the NSA until August 2013, despite some spot-checks indicating problematic selectors in 2010 and 2011. Schindler, who joined the BND in 2012, was not told of the discovery of problematic selectors until March last year.

To the question of why BND employees did not notify superiors about the requests from the NSA, Schindler replied that he imagined it was due to the BND's "great technical dependence" on the NSA. The spy chief added that a lack of communication between BND headquarters and its branches across the country was also to blame for the failures.

Schindler further defended his agency's collaboration with the NSA on the grounds that Germany is reliant on the NSA's help.

"We are dependent on the NSA, not the other was around," said Schindler. "The NSA is our partner, not our rival."

The parliamentary committee investigating BND activities requested the German government to give access to a full list of targets provided by US intelligence.

According to recent media reports, the BND helped the NSA tap into data of French authorities and EU institutions, including the European Commission.

Earlier this week the German press reported the discovery of extensive lists of selectors, submitted during the period of the collaboration. One file comprised 400,000 selectors from spring 2005, and another contains 59,000 selectors from September 2006 to early 2008. According to the report, only 400 of the selectors had been reviewed by employees of the BND.