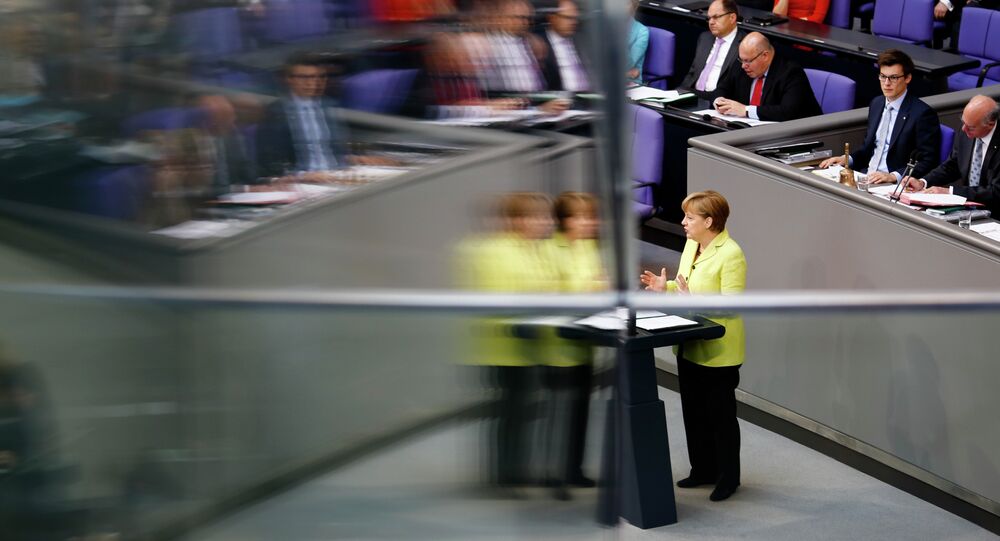 European Union leaders are due to begin a tense summit on Thursday evening with their counterparts from Ukraine, Georgia, Moldova, Armenia, Azerbaijan and Belarus, 18 months after the last meeting triggered the crisis in Ukraine.

German Chancellor Angela Merkel, UK's David Cameron and France's Francois Hollande are all due to attend the meeting in Riga, Latvia, on Thursday and Friday this week, but the talks are likely to be strained after Armenia and Belarus refused to agree to sign a statement calling Russia's annexation of Ukraine's Crimea peninsula illegal.

It is the first EU Eastern Partnership Summit since the one in 2013, during which Ukraine was on the brink of signing an Association Agreement with the European Union.

© Sputnik / Alexey Kudenko
When former President Viktor Yanukovych refused to sign the trade agreement with the EU in November 2013, it brought about mass demonstrations centred on Maidan Square in Kiev, triggering a civil war.

"These are not easy negotiations," one EU diplomat said after talks in Brussels on a draft text that will be reviewed in Latvia by EU foreign ministers on Thursday evening. Any success for the summit would depend, the diplomat added, on how the leaders would "spin" their modest, largely technical, areas of agreement — "and on how it will be read in Moscow."

The statement to be agreed in Riga is due to note the EU's condemnation of the Crimean situation but also refer to partner governments' positions in a March 2014 UN vote in which Armenia and Belarus took Moscow's line.

Behind the scenes of the #RigaSummit: final preparations in the "Castle of Light". Read more: http://t.co/xG1fWWRQIu. pic.twitter.com/PRfmwH4bcP

Having courted its eastern neighbours and Ukraine, plunging Europe into the biggest crisis since the Cold War, the EU is now trying to soft-pedal its ambitions without turning its back on its impoverished partners and seeking a way out of a conflict with Russia that has cost thousands of lives and prompted mutual sanctions in an East-West trade war.

What are the main issues which will be discussed at the forthcoming #RigaSummit on the Eastern Partnership? http://t.co/s65F4iIu9c #EaP

In Brussels on Tuesday, Russian Foreign Minister Sergei Lavrov said he would hold EU leaders to their pledges that the Eastern Partnership would not harm Russia's own interests in the "near abroad", where the 2008 Georgian war in South Ossetia also took place.

"Trying to present things as 'you're either with us or against us', as a zero-sum game, brings undesirable results," he said, adding he wanted to see action in Riga to reassure Moscow.

A Man Can Dream: Poroshenko Aims to Become Member of EU Parliament