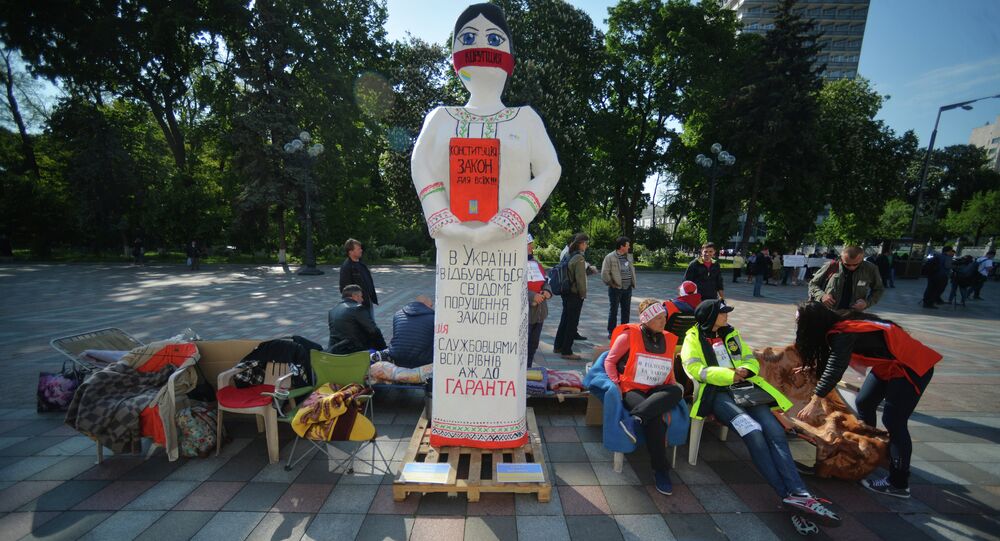 As Ukraine is dancing on the edge of default people have started a "Financial Maidan" protest in front of the Verkhovna Rada in Kiev. The economic situation in the country is boiling over.

© Sputnik / Stringer
‘Automaidan’ Activists Protest Against Corruption in Kiev
Over a dozen people started a protest camp in front of the Ukrainian parliament building in Kiev, demanding politicians repay loans taken from financially troubled banks, as well as the resignation of Valeriya Hontareva, the head of National Bank of Ukraine, TV channel 112 Ukraina reported.

A series of the so-called "Financial Maidan" protests started at the end of 2014, when Ukrainians, unhappy about the financial situation in the country, took to the streets of Kiev.

This time, over a dozen protesters set up a camp site in front of the parliament and announced that they will not leave the camp until their demands are met. Eleven protesters are said to have started a hunger strike.

The Verkhovna Rada plans to take a look at the bill on Thursday.

© Sputnik / Anzhela Babenko
Ukrainian Economy Suffers 15% Drop in GDP in First 100 Days of 2015
Currently, the Ukrainian economy is on the verge of collapse. Earlier there were reports that inflation in Ukraine was expected to increase from 12.1 percent to an astonishing 33.5 percent, while the country's GDP will decline by 5.5 percent.

The country's economy became strained after the overthrow of former President Viktor Yanukovych in February 2014 following the Maidan protests. The economic situation became even worse after Kiev started a military operation against the self-proclaimed Lugansk and Donetsk republics in April 2014.