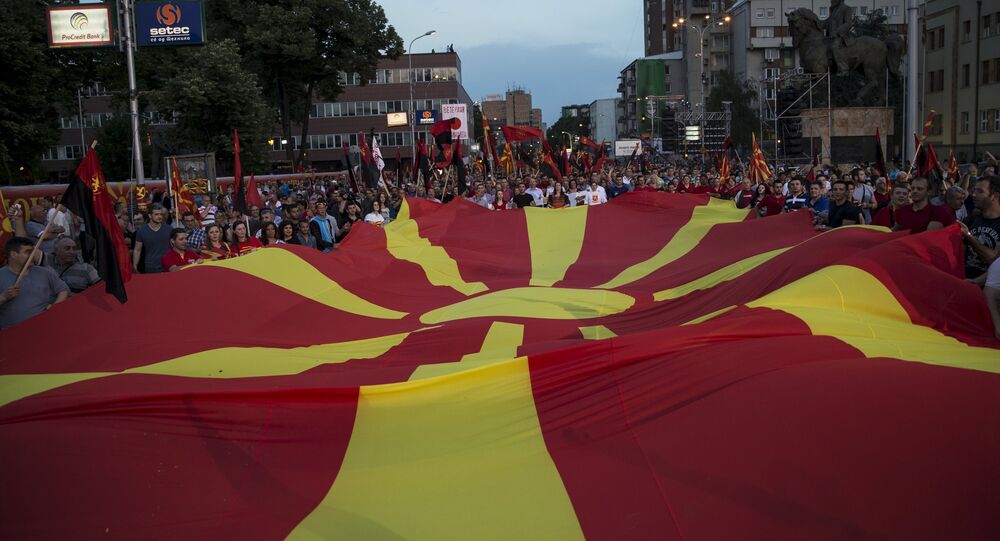 Macedonian Prime Minister Nikola Gruevski said at a pro-government demonstration he would not resign "without the will of the people".

SKOPJE (Sputnik) — Macedonian Prime Minister Nikola Gruevski said at a pro-government demonstration he would not resign "without the will of the people," despite calls from the opposition, a RIA Novosti correspondent reported from the site on Monday.

A massive pro-government rally organized by Macedonia's ruling conservative VMRO-DPMNE party is held in the center of the country's capital Skopje. According to the rough estimates, some 30,000 people gathered on the square in front of the Macedonian parliament’s building.

"Macedonia does not need a prime minister, placed in power under such a destructive scenario," Gruevski said.

He noted that his party is still committed to the integration into the European Union and NATO.

"My party remains on course to the EU and NATO’s joining," the prime minister said addressing the meeting in Skopje.

The rally’s participants welcomed the statement of the prime minister with applause, chanting his name.

At the same time, another meeting, organized by the opposition, is being held less than one mile from the parliament.

On Sunday, crowds of people took part in an anti-government corruption and police brutality rally organized by the SDSM. Zaev urged the protesters not to leave the streets until Gruevski steps down. A group of protesters has set up a tent camp outside government buildings in central Skopje.

The recent rallies come at a time of political instability in Macedonia.

Gruevski has also accused local opposition of capitalizing on the terrorist attack in the city of Kumanovo.

On May 9, Macedonia witnessed violent clashes between police and an armed group in Kumanovo, a city bordering Serbia and Kosovo, which claimed the lives of eight Macedonian security officers and 14 Albanian gunmen. According to the Macedonian Interior Ministry, the group was led by five former members of the Kosovo Liberation Army (KLA).