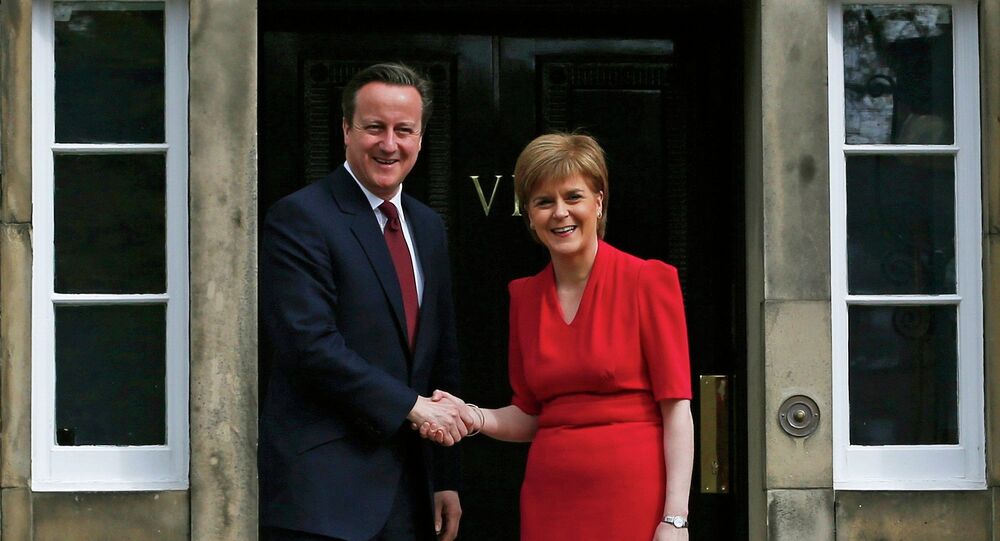 Scotland's First Minister Nicola Sturgeon used the meeting with Cameron to say he would be personally responsible for a second referendum if Edinburgh’s demands are ignored.

A source close to Sturgeon told the newspaper that she used the meeting with Cameron on Friday to say he would be personally responsible for a second referendum if Edinburgh’s demands are ignored.

"The Tories can recognize the significance of the mandate flowing from the General Election and work to deliver more powers, or they can go on pretending it is business as usual and watch as support for independence grows," the source told The Sunday Herald.

© AFP 2020 / ANDY BUCHANAN
SNP Results in General Election Exit Polls Raise Concerns Over UK Unity
According to the newspaper, Cameron rejected Sturgeon’s claim, saying that the future of Scotland depends on both of the leaders.

In the general election held on May 7, the pro-independence Scottish National Party (SNP) headed by Sturgeon won 56 out of 59 Scottish seats available at Westminster.

The SNP has long urged a further devolution of powers from Westminster to Scotland.

The SNP initiated September 2014 referendum on Scotland's membership in the United Kingdom. The vote has failed, but the party has seen a major increase in support in the recent months.

Cameron Rules Out Another Independence Referendum in Scotland