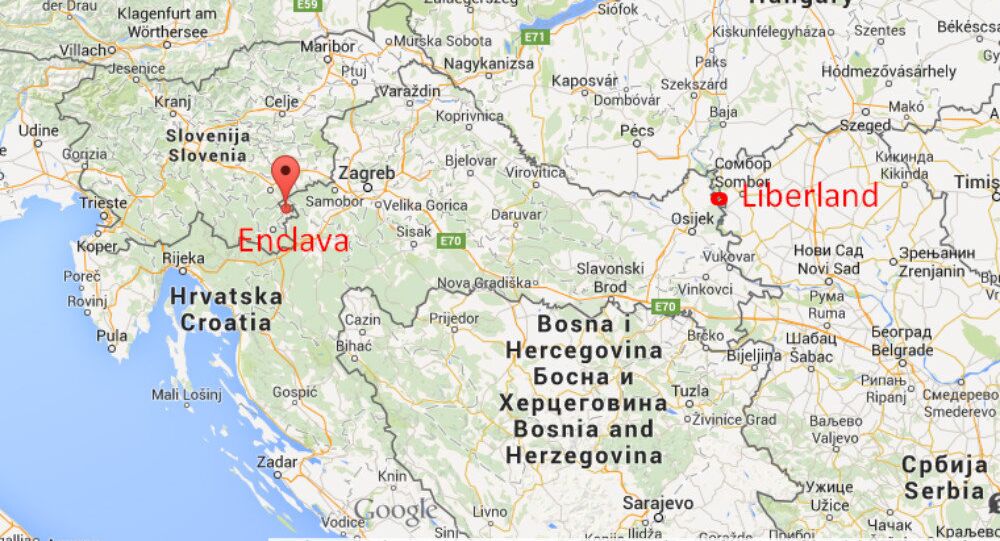 Following in the footsteps of Liberland's unilateral declaration of existence, a Polish tourist has announced the foundation of the Kingdom of Enclava on the border of Slovenia and Croatia.

© Photo : Google Maps
Welcome to the 'Republic of Liberland' – Europe's Brand New Country
The former Yugoslavia is proving fertile ground for those wanting to set up their own country, with a Pole named K. Wron becoming the latest to try and seize so-called 'nobody's land' between the borders of former members of the federation.
© REUTERS / Antonio Bronic
Police Arrest President of Self-Declared Liberland, Newest Micronation
According to its website, the Kingdom of Enclava "is a self-proclaimed micronation, situated on an unclaimed parcel of land strip at the Croatia-Slovenia border."

Wron proclaimed the nation on April 23, claiming that differences in the boundary lines on Croatian and Slovenian cadastral maps give rise to an area of 100 square meters which is not claimed on either map, and as such is, or was before April 23, a 'Terra Nullius,' or 'nobody's land.'

In elections held earlier this month, the First Parliament of Enclava was elected, with an international cabinet consisting of members from as far as the US and China. The official languages of the self-proclaimed Constitutional Monarchy, which had so far granted 134 citizenships, are English, Polish, Slovenian and Chinese, while the currency will be the Dogecoin cryptocurrency.

The establishment of Enclava follows the establishment last month of Liberland, a self-proclaimed micronation set up by pro-libertarians from the Czech Republic, which its self-appointed President Vit Jedlicka claims has received over 300,000 requests for citizenship.

At the beginning of May, Jedlicka announced he was granting the first citizenships to his country, which, with seven square kilometers of land, dwarfs tiny Enclava. The citizenship ceremony was held at a restaurant in the nearby village of Backi Monostor, after Croatian police denied Jedlicki access to the territory on the bank of the Danube River which he declared 'Liberland.'

Neither the Croatian nor Slovenian authorities have commented on the declaration of the Kingdom of Enclava; in a commentary on the Liberland declaration, the Croatian Ministry of Foreign Affairs said on its Facebook page, "virtual jokes, however much they are sometimes interesting, remain what they are … virtual jokes, and for them we don't have any official comment."

An expert in international law from the University of Zagreb likewise told Index.hr she understood the nation to be no more than a joke.

"That territory, at the moment, as far as I know, is under the sovereignty of the Republic of Croatia, and whose it will be after the resolution of the [territorial] disagreement [between Croatia and Serbia] – whether that will take the form of an agreement between the parties or the resolution of a court or arbitration – remains to be seen. Even if Mr Jedlicka or somebody else has ownership of that part of land, it remains under the sovereignty of the Republic of Croatia," Professor Maja Sersic explained.