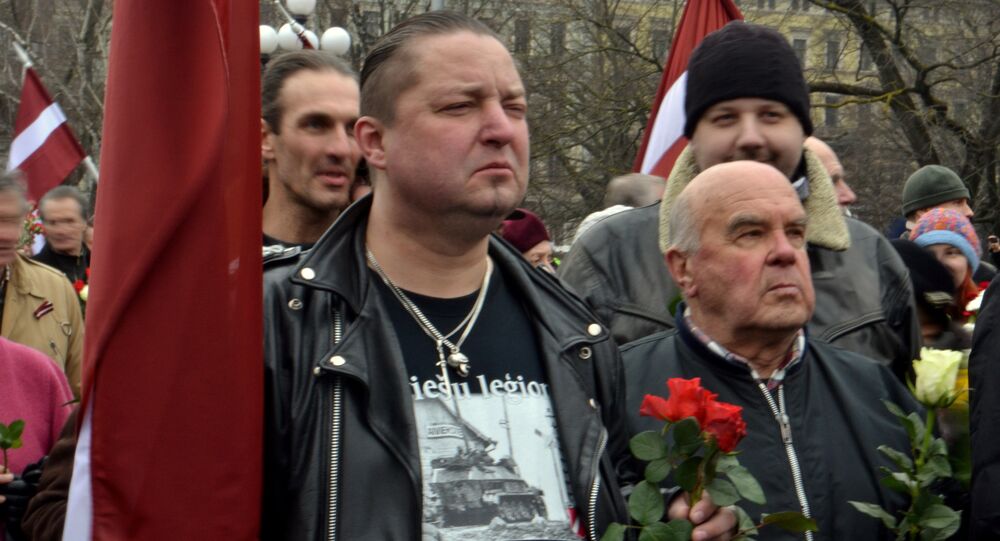 The administrator-general of the Eurasian Observatory for Democracy & Elections (EODE) Luc Michel said that the glorification of Fascism and neo-Nazism accompanies every stage of NATO expansion to the East.

© AP Photo / Roman Kosarov
Growth of Nazism in Europe is 'Obvious Threat' – Kremlin Chief of Staff
MOSCOW (Sputnik), Alexander Mosesov — Links between the tendency to glorify Nazism in Eastern Europe and NATO expansion to the East, in particular to the Baltic states, can be drawn, the administrator-general of the Eurasian Observatory for Democracy & Elections (EODE) told Sputnik Thursday.

“The glorification of Fascism and neo-Nazism, and history revisionism that goes along with it, are not unique to Ukraine of 2014-2015. They accompany every stage of NATO expansion to the East. In particular in the Baltic States, but also in Romania,” Luc Michel said.

Michel added that the Belgian government’s decision not to attend the May 9 Victory Day parade in Moscow was one of the examples of Russophobia, backed by NATO.

© Sputnik / Miroslav Luzetsky
Secret Documents: Kiev Instructs Media to Glorify Nationalist Groups on Victory Day
Europe has recently seen a rise in radical extremist movements. A parade for Nazi veterans has been held annually in the Latvian capital Riga since 1998, neo-Nazi marches have also been held in Lithuania and Estonia, while neo-Nazi groups, such as the Right Sector and the Azov Battalion openly operate in Ukraine.

As relations between Russia and NATO deteriorated amid the Ukrainian crisis, the alliance has been boosting its military presence near Russia’s borders, including in the Baltics.

Russia has repeatedly stressed that NATO expansion toward the country's borders could undermine regional security.