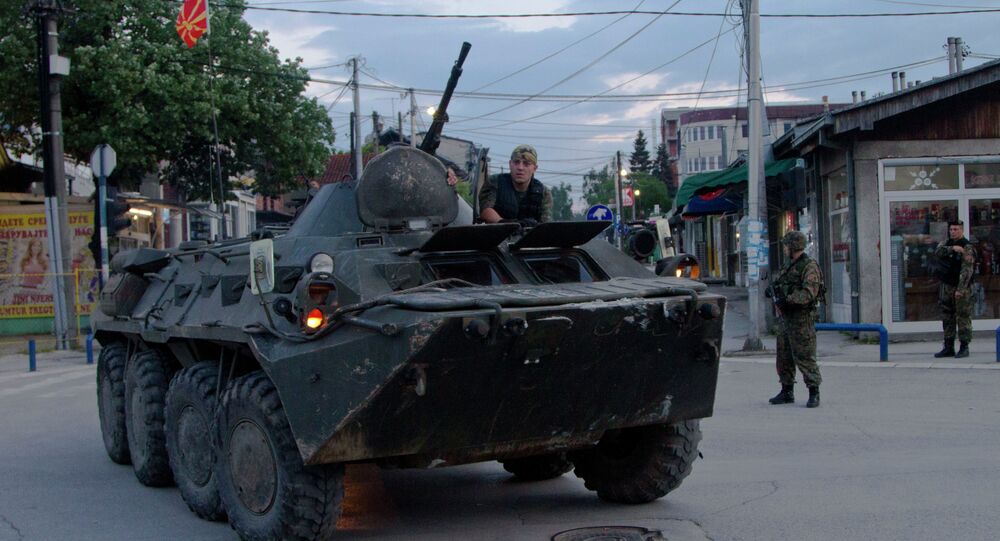 The Macedonian city of Kumanovo, where 14 gunmen and eight police officers were killed in clashes over the weekend, is usually a tolerant and peaceful place that was dragged into an outside conflict, the city’s mayor told Sputnik on Tuesday.

© REUTERS / Ognen Teofilovski
NATO Uses Clashes in Macedonia to Undermine Russia's Gas Pipeline Project
MOSCOW (Sputnik) — According to Macedonian authorities, the armed group behind the weekend's unrest was led by members of the now dissolved Kosovo Liberation Army, a paramilitary force of ethnic Albanians that fought in the Kosovo War.

Thirty people were charged with terrorism offenses following the clashes, including 18 citizens of the partially recognized state of Kosovo, and two Macedonians who had lived there.

PHOTOS: Shootings start again after a 30 min pause ensured by OSBE. Pictures are taken from the citizens of #Kumanovo pic.twitter.com/9PJ33BP5KY

Not yet done, still shooting and detonations, some buildings on fire. #Kumanovo #Куманово pic.twitter.com/mtgJdNvy2B

Rather than being angry with the group that organized the deadly clashes, residents of Kumanovo blame Macedonia’s ruling parties of fueling a political conflict, Mayor Zoran Damjanovski told Sputnik.

“They believe that Kumanovo was quite unnecessarily dragged into this conflict, and that Kumanovo used to be an example of tolerance and does not deserve to become a Balkan black hole,” he said.

The Kumanovo clashes come weeks after an attack in the Macedonian village of Gosince near the border with Kosovo, where dozens of gunmen seized the local police station, calling for the establishment of an Albanian state within Macedonia.

Ethnic Albanians make up about one-fourth of Macedonia's two-million population.

The critical situation is now over and normal life in the city is being gradually restored, according to the mayor.

On Wednesday, schools and kindergartens will reopen, and central and local authorities will begin jointly assessing damage to property caused by the fighting, he said.