The Donetsk and Lugansk People’s Republics, two regions in eastern Ukraine that protested against Kiev following an illegitimate coup in February 2014, mark their first year anniversary on May 11. Sputnik remembers the most significant events that took place in Donbass and tells how the military conflict in eastern Ukraine unfolded.

May 11 marks the first year anniversary of a referendum in which the residents of Donetsk and Lugansk, two regions in eastern Ukraine, voted for their independence and successfully established the Donetsk and Lugansk People's Republics, also known by their acronyms the DPR and the LPR. 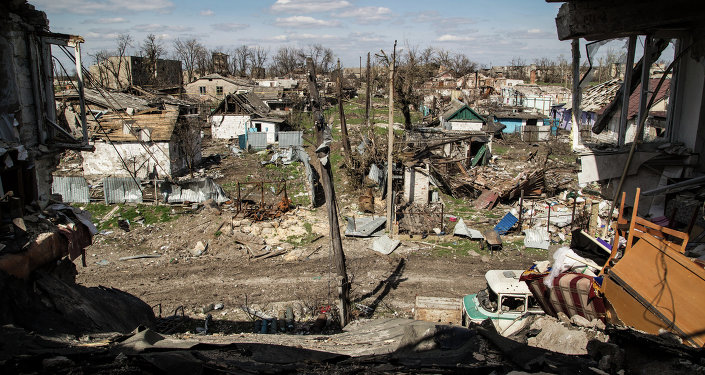 © AFP 2019 / OLEKSANDR RATUSHNIAK
Ukrainian Conflict Left up to 10,000 Civilians Dead – DPR
Throughout the last year, Kiev security forces waged a bloody war in Donbass, the geographical and cultural region that encompasses both the DPR and the LPR. The region is on the verge of a humanitarian catastrophe. Nevertheless, the DRP and the LPR managed to create their own effective governments, hold elections and start paying pensions, salaries and social benefits to their people.

Leaders of the Donbass independent republics are certain that they managed to accomplish a great deal over the last year. The people of the DPR and the LPR marked May 11 as a special holiday, celebrating the one year anniversary of their independence. Representatives from all cities in the DPR marched on the central streets of Donetsk at 11 a.m. An estimated 30,000 people attended the march.

How the Conflict in Eastern Ukraine Began

In February 2014, then-President of Ukraine Viktor Yanukovych lost his power due to an illegitimate coup. Soon after that, the Verkhovna Rada announced early presidential elections for May 25.

© RIA Novosti . Evgeny Biyatov
Self-Defense Forces Seize Government Building in Ukraine’s Luhansk
The residents of Donbass did not recognize new authorities in Kiev. Demonstrations against the new government swept across several regions of Ukraine. The most active demonstrations took place in the Kharkov, Donetsk and Lugansk regions, with hundreds of thousands of people rallying against the coup in Kiev.

People in Donbass started to organize self-defense forces to protect themselves from Kiev-backed radical Maidan protesters, who began to arrive to eastern Ukraine to crush the popular unrest. Donbass activists created initiative groups that appealed to leaders of the regions asking them to hold a referendum. Negotiations proved fruitless. After the political elite of regional councils in Donetsk and Lugansk left the city, the pro-independence activists took matters into their own hands and began to occupy government buildings.

The new Kiev government demanded that the pro-independence supporters leave the government buildings in eastern Ukraine. Pro-Kiev raiders began to arrive to eastern parts of Ukraine en masse to help subdue the independence supporters. Demonstrators in Kharkov and Odessa couldn't withstand the pressure and were brutally suppressed by pro-Kiev forces.

Nevertheless, the residents of eastern Ukraine proclaimed their independence on April 7, 2014. To lay foundations for their new statehood, new Donbass leaders decided to hold a referendum on May 11, 2014. 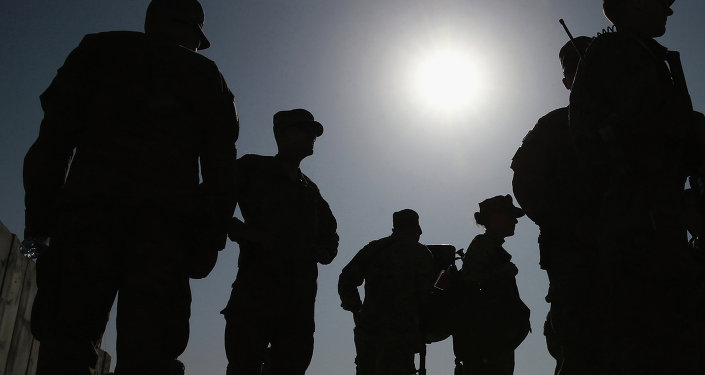 © AP Photo / Mark Wilson
Kiev Says US Special Forces Not Part of Protest Crackdown in East Ukraine
In response, the Kiev government launched a military operation, using aviation, artillery and armored vehicles. Towns and villages in the Lugansk and Donetsk regions became targets of artillery shelling. Thousands fled the regions, leaving behind their homes that laid in ruins after the bombings. The residents of the breakaway republics hastily organized a council trying to ensure the operation of factories and mines in the region. The Kiev government refused to negotiate with the DPR and the LPR representatives, labelling them "terrorists" and "pro-Russian rebels."

The majority of residents in both the Donetsk and Lugansk regions voted for ther republics' independence.

In the Donetsk region, 89.07 percent favored independence from Kiev, 10.19 percent voted against independence, while less than 1 percent of ballots were spoiled.

The residents of the Lugansk region supported independence of the LPR even more enthusiastically than their counterparts in Donetsk.  Only 3.8 percent voted "against" the independence act, 1,060 ballots were invalid, while everyone else voted in favor of the act.

In the spring of 2014, the independence supporters created the DPR People's Council that consisted of one hundred activists. The first meeting was held in the building of Donetsk's regional administration. The activists appointed acting ministers and leaders of their own security agencies.

Most DPR ministries opened in the fall. Military police departments and the commandant's office started to operate as well.

© Sputnik / Valeriy Melnikov
LPR Head Inauguration Ceremony Begins in Luhansk
To bring legitimacy to their governments, the leaders of the two republics decided to hold parliamentary elections. Following the elections on November 2, Alexander Zakharchenko became the leader of the DPR, while Igor Plotnitsky was elected as the leader of the LPR.

After the elections, the leaders of the DPR and the LPR began to enact legislative acts. The deputies of the People's Council started to implement laws under a new legislative framework. In 2015, the two republics opened their own General Prosecutor's office and courts.

During the Kiev-led military operation in Donbass, a lot of the region's infrastructure was destroyed. After Kiev forces began shelling cities in eastern Ukraine, residents were cut off from electricity, gas and water, as the Ukrainian security forces deliberately targeted electric power- and gas supply lines. With each passing day, the humanitarian situation in the DPR and the LPR became increasingly dire. Food, water and medicine became scarce.

Meanwhile, the authorities of the DPR and the LPR began to rebuild their republics. Construction supplies are sent from Russia as humanitarian aid. In the fall of 2014, DPR authorities created the center for the recovery of Donbass that includes daily monitoring, organization and restoration work of Donbass' ruined cities.

By the fall of 2014, Kiev withdrew all banks and government offices from the DPR and the LPR, leaving millions of Donbass civilians without jobs, salaries, pensions and social benefits. The bank accounts of Donbass residents were frozen, nobody could withdraw their money. Later, that money was stolen by Ukrainian authorities in Kiev.

To support the crushing economy, the DPR authorities opened their first bank by the end of 2014. The lack of local currency forced local authorities to start using the Russian ruble in addition to the hryvnia. Since the spring of 2015, Donbass residents have been able to use both currencies.

When Kiev started the military operation in April, Ukrainian President Petro Poroshenko said the campaign wouldn't even take weeks, but "hours." However, by the fall it became clear that the Ukraine security forces wouldn't easily suppress the independence supporters in the East. Subsequently, Kiev was forced to sit at the negotiations table with the leaders of the republics using help of intermediaries, represented by Russia and the Organization for Security and Cooperation in Europe (OSCE).

© AFP 2019 / SERGEI GAPON
Minsk Group Makes 'Breakthrough' on Ukraine Reconciliation Talks
Minsk was chosen as a place for the peace talks between Kiev and the two Donbass republics. The Minsk talks resulted in a ceasefire between the two fighting sides, worked out with the help of leaders from Russia, Ukraine, France and Germany. Beside the ceasefire, the peace agreement included withdrawal of heavy weaponry, prisoner swaps and constitutional reforms to grant the DPR and the LPR more autonomy.

Since then, the Trilateral Contact Group, comprising Russia, Ukraine and OSCE, was created. The group has been working towards a diplomatic resolution of the Ukrainian conflict. Poroshenko urged the Contact Group to discuss the idea of deploying UN and EU peacekeepers to Donbass.

According to UN estimates, since the start of the military operation in eastern Ukraine in April 2014, the conflict has claimed the lives of more than 6,000 people.

EU, US to Confirm in Washington Same Stance on Ukraine Conflict – Adviser