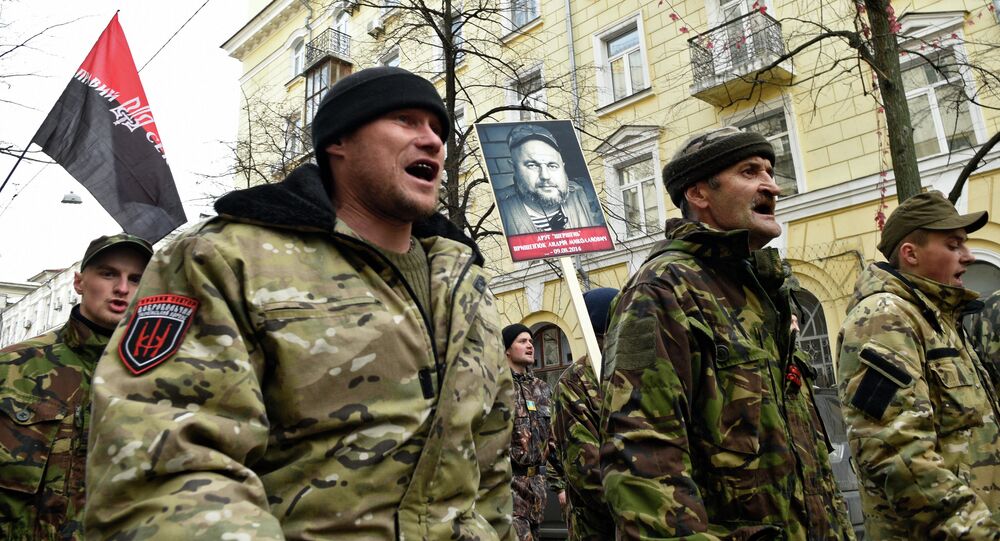 Right Sector nationalists continue to flirt with the Ukrainian armed forces. Here is why they need it and what they can teach the regular army.

Right Sector extremists on Monday invited the Ukrainian Armed Forces for joint military drills where they will teach recruits their tactics and share their experiences.

In its appeal, the Right Sector calls for "uniting all forces to achieve a victory over the enemy" and states its readiness to defend the country "to the last gasp, to the last bullet".

But in essence the formation is trying an ulterior diplomacy, as it is going through a bad stretch.

Its fighters quickly rose on the wave of violent nationalism and emerged unscathed with authorities turning the blind eye to their atrocities.

© REUTERS / Valentyn Ogirenko
Being ‘Absolute Patriots' Puts Ukraine's Right Sector Above the Law
But they clearly failed to become the heroic spearhead of Kiev's offensive on Donbass and only gained notoriety for looting and terrorizing of defenseless civilians.

To make matters worse, Kiev finally realized that the daredevil radicals were only useful during the Maidan power grab and shortly after it, but not now.

Petro Poroshenko's team probably understood that the extremists went too far when they rallied in Kiev demanding the president's resignation and threatening to burn his administration to ashes.

But the Right Sector still believed in its permissiveness and exclusive self-importance, requesting a special position in the Armed Forces.

So on the one hand, the ultranationalists are maneuvering to avoid a resolute crackdown.

On the other hand, they are still using war for PR.

© AFP 2021 / ANATOLII STEPANOV
Right Sector Radicals Attack Striking Coal Miners in Kiev
In their statement, the Right Sector voiced their readiness to train Ukrainian soldiers. But what can the infamous paramilitary nationalists teach soldiers, for example?

First, they can explain how to burn alive almost 50 people in Odessa and walk free in front of the whole world.

Third, they can instruct servicemen to torture those who witness uncomfortable truths; even if those witnesses are renowned activists and former friends.

Fifth, they can reveal how to be ultranationalists in a European country and feel at ease despite multiple accusations of neo-Nazism.

There are indeed many things the Right Sector can teach.