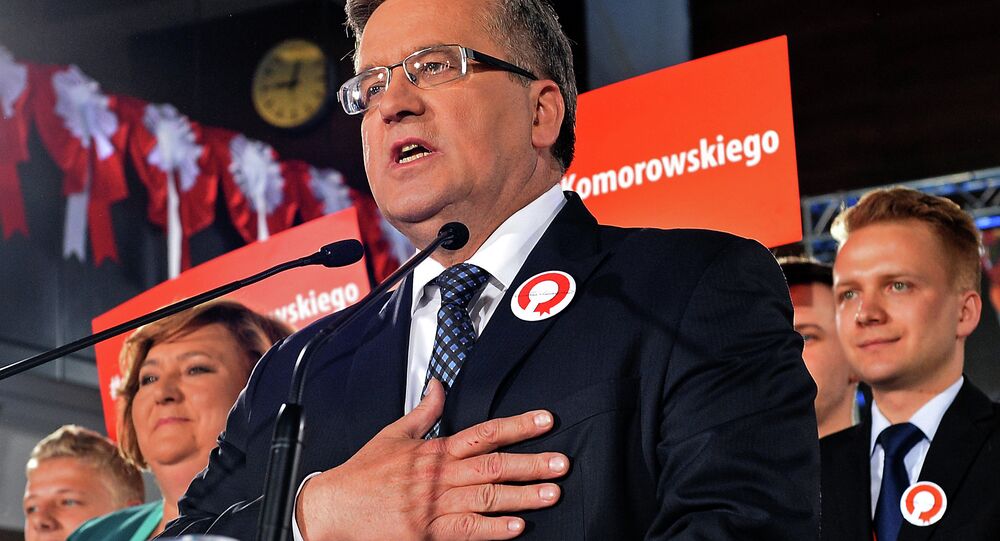 President Komorowski Believes in Victory in 2nd Round of Poland's Elections

Incumbent Poland's President Bronislaw Komorowski believes he will win the second round of the presidential election.

WARSAW (Sputnik) — Incumbent Poland's President Bronislaw Komorowski has said he will win the second round of the presidential election, despite the fact that he had lost the first one to Andrzej Duda.

Komorowski, an independent candidate, supported by the Civic Platform center-right party, got 32.2 percent of the votes, and Duda, of the Law and Justice conservative party, led by former Prime Minister Jaroslaw Kazcynski, obtained 34.8 percent, according to the exit polls.

"Hard work, fierce struggle lay ahead of us. As well as the victory, I am sure", Komorowski said Sunday at his campaign office in Warsaw.

© REUTERS / Kacper Pempel
Poland's President Komorowski Not Reelected in First Round - Exit Poll
He thanked the voters who had supported him during the first round of the election earlier in the day and congratulated on the strong performance both Andrzej Duda and former rock singer Pawel Kukiz, who took the third place with 20.3 percent of the votes.

Eleven candidates took part in the presidential race in Poland after collecting the required 100,000 signatures of voters each in the run-up to the elections.

The second round will take place on May 24.

In Polish politics, the post of prime minster is considered to be the most powerful, but president heads the armed forces, can veto legislation and has the power to dissolve the parliament in certain cases.

Poland Should Learn From Russia How to Commemorate V-Day - Journalist

How to Celebrate V-Day Without Celebrating Victory? Ask Poland's President