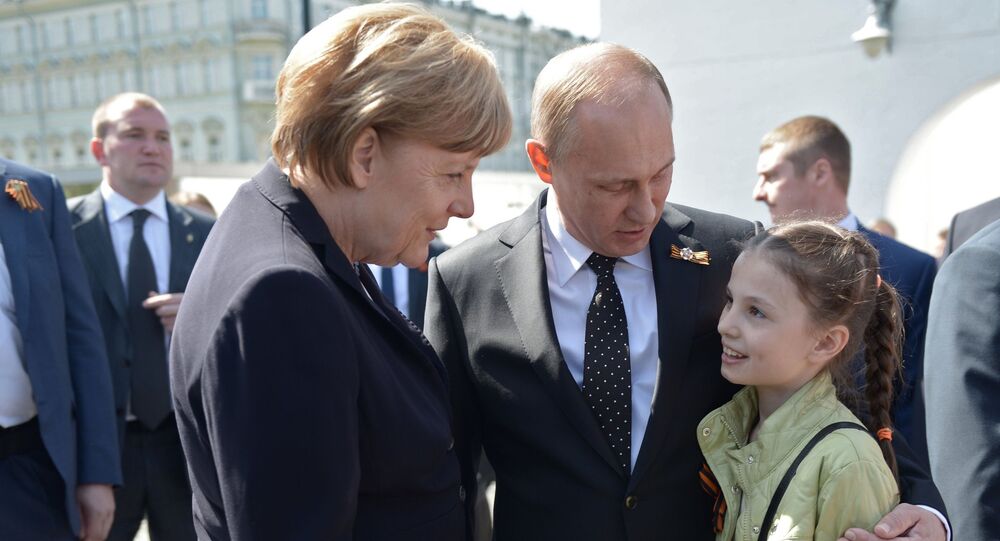 The German chancellor arrived in Moscow on May 10 where she met with Russian President Vladimir Putin and laid a wreath at the Tomb of the Unknown Soldier.

The Western media views Angela Merkel’s visit to Moscow to commemorate the 70th anniversary of the victory over fascism as a sign of reconciliation between the two countries.

N-tv.de noted, for instance, that Vladimir Putin and Angela Merkel are, despite all political differences, closely related in some way and that the German chancellor does not want to break off contacts with her Russian counterpart.

Host photo agency
Putin, Merkel Lay Wreath at the Tomb of the Unknown Soldier in Moscow
The source also noted that one of the reasons why the German Chancellor decided to visit Moscow, although the majority of Western leaders rejected the invitation, is "the heavy burden of German history." Before the trip, Merkel said how important it was for her to honor the memory of the millions of people who died in the war against Nazi Germany.

According to The Wall Street Journal, Merkel’s visit to Moscow broke a sort of "taboo" widely spread among Western leaders who have avoided travelling to Russia since the beginning of the Ukrainian crisis.

The German newspaper Tagesschau viewed Merkel's trip to Moscow is a "gesture of reconciliation."

"This is a short, but very important visit of the Chancellor to Moscow,” which also serves as an important signal, the newspaper write, emphasizing that this trip, as well as Russia's reaction to it proves that Merkel is still "one of the key interlocutors" of Russia in the West.