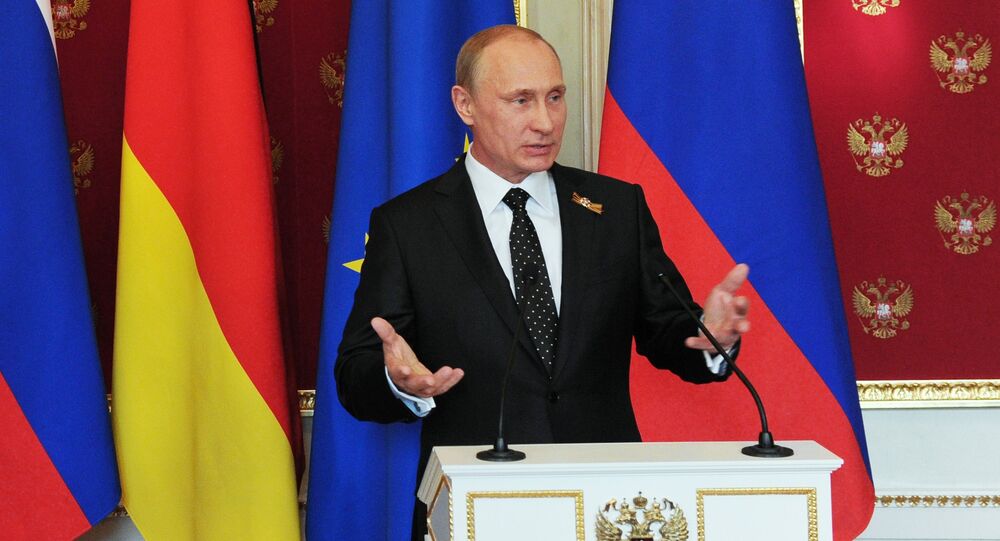 Left alone in the face of imminent Nazi aggression, the Soviet Union had no choice other than to sign a non-aggression pact with Hitler, the so-called Molotov-Ribbentrop Pact, President Putin said during a meeting Sunday with visiting German Chancellor Angela Merkel.

"The Soviet Union made every effort to set up a system of collective security against the Nazi threat, to forge an anti-Hitler coalition in Europe, but all those attempts fell through," Putin said.

"Some politicians believed that the war was unavoidable. After his colleague [Prime Minister Neville Chamberlain] arrived in London with that piece of paper and declared the accord with the Germans signaled ‘peace for our time’, [Winston] Churchill said that the war was now imminent. So when the Soviet Union realized it was being left alone to face Nazi Germany, it took steps to avoid a head-on confrontation and signed the so-called Molotov-Ribbentrop Pact."

Before Sunday’s meeting in the Kremlin Vladimir Putin and Angela Merkel laid a wreath at the Tomb of the Unknown Soldier, a WWII memorial near the Kremlin walls.

"Today Chancellor Merkel and I laid a wreath at the Tomb of the Unknown Soldier to commemorate the victims of the Great Patriotic War, which was the greatest tragedy for the whole world and for our two nations. And we are one on the impact of those tragic events and the historic lessons learned from them. Our today’s ceremony reminds us of the long and winding  road Russia and Germany have left behind for the sake of reconciliation, from bitter resentment and enragement to mutual understanding and cooperation", Putin said.

Host photo agency
Putin, Merkel Lay Wreath at the Tomb of the Unknown Soldier in Moscow
Angela Merkel said during a joint press conference with the Russian president that Germany bears the historic responsibility to save the memory of the millions of victims who had died at the hands of the Nazis.

"I came here to bow before the millions of victims of the Soviet people and others by the hands of National Socialistic Germany. The historical responsibility lies on us so that others remember and learn a lesson from this," Merkel said.