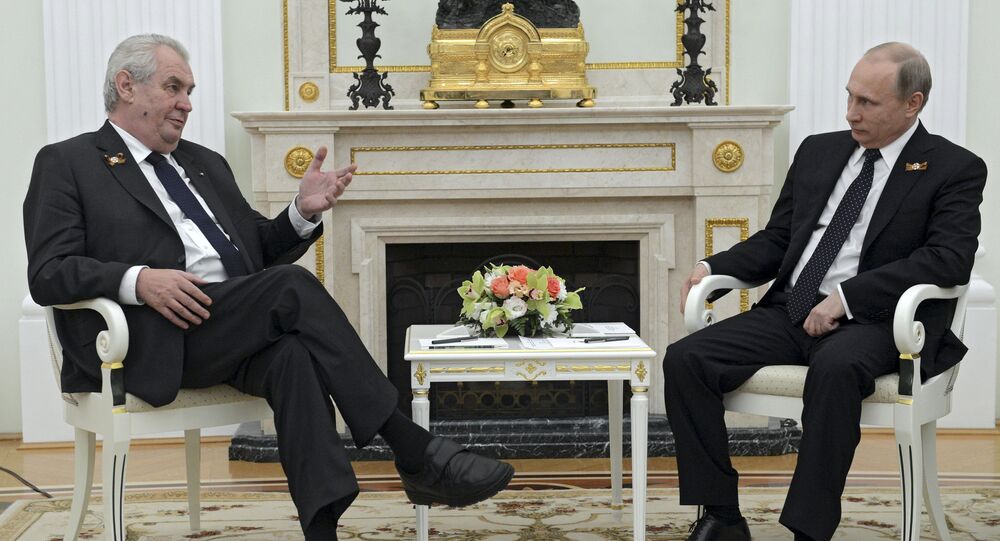 Czech President Milos Zeman said that he believed the recent chill in Russia's ties with Europe would soon give way to "normal" political, economic and cultural relations.

© AP Photo / Petr David Josek
Czech President Freezes Out US Ambassador for Undiplomatic Advice
MOSCOW (Sputnik) — Czech President Milos Zeman said Saturday at a meeting with his Russian counterpart, Vladimir Putin, he was confident that sanctions piled on Russia by the West would be lifted soon.

"I am sure that sanctions are there for a short term. I spoke against these sanctions," Zeman said in Moscow, to which Putin responded "We know."

The Czech leader was in the Russian capital on Saturday as the nation marked 70 years since the end of World War II.

Zeman added he believed the recent chill in Russia's ties with Europe would soon give way to "normal" political, economic and cultural relations.

© AP Photo / Cliff Owen
Czech President ‘Dreams’ of Russia Joining EU
Earlier in the day, Zeman said in an interview with Russia's Kommersant FM radio station he did not rule out restrictions on Moscow could be dropped by the end of 2015, citing peace progress in eastern Ukraine.

"I'd also like to add that all sanctions can possibly be lifted by the end of this year," he told the radio, adding the Council of Europe was going to discuss this topic in summer.

Last year, the United States along with the European Union and their allies imposed several rounds of sanctions targeting Russia's banking, energy and defense sectors, as well as certain individuals. The current anti-Russia sanctions are due to expire in July.