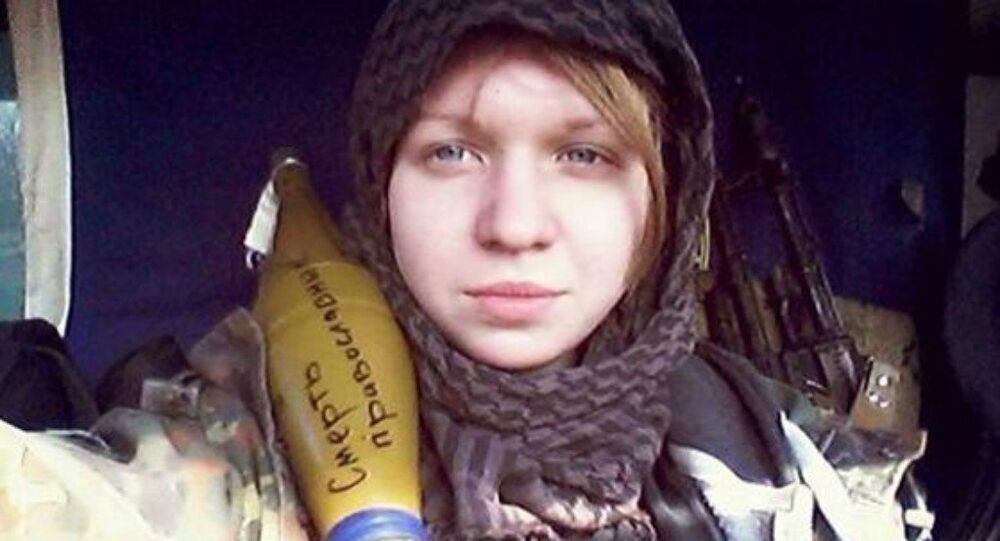 Kiev prosecutors have reported the arrest of 19-year-old Aidar Battalion volunteer Vita Zaverukha, who is suspected of serving as an accomplice in the killing of two Ukrainian police officers and the injury of three more following a botched gas station robbery in Kiev which occurred on May 4, Ukrainian media have reported.

"As part of the investigation of criminal proceedings over an attack on a gas station and the killings of law enforcement officers on the night of May 4 in Kiev, another suspect has been arrested: a 19-year-old resident of Vinnitsa," a statement on the website of the Kiev prosecutor's office reads.

The statement added that Zaverukha has been detained under the criminal code article for an "attempt on the life of an officer of the law."

Zaverukha, a volunteer in the radical nationalist Aidar Battalion with openly neo-Nazi views, was briefly lionized as a media darling last year as a "heroine fighting against separatists."

© Sputnik / Alexander Maksimenko
West Must Influence Kiev to Eradicate Neo-Nazism in Ukraine – Diplomat
On May 4, several suspects participated in the robbery of a Kiev gas station, shooting and injuring the attendant. Arriving at the scene and finding out the details about the suspects' car, police gave chase. Coming up on the car, the police officers' car was hit with a barrage of close range automatic weapon fire, which pierced through officers' bullet proof vests, killing officers Yuri Romanenko and Yuri Hristenok and injuring a third officer. More officers arrived, chasing the suspects' vehicle into a dead end, where two more officers were wounded; one bandit was killed and three others captured.

Citing ex-Kiev-2 Battalion volunteer Evgeniy Karas, Vesti has reported that Zaverukha's four male accomplices were all members of volunteer battalions fighting in country's eastern 'anti-terrorist operation' zone. Among them was Vadim Pinus, 23, a decorated Azov Battalion fighter who was killed in the shootout with police.

The others include 20-year-old Evgeniy Koshelyuk, a volunteer who has served in the Azov, Aidar and Tornado battalions, 17-year-old sniper Andrei Romanyuk, and 17-year-old Nikolai Monishenko, an activist and organizer for ultra-right organizations who had been renting the apartment where the suspects hid after the attack on police officers.

© AP Photo / Efrem Lukatsky
Back to Red and Black: Ukraine's Controversial New Colors for Victory Day
The Kiev prosecutor's statement notes that Zaverukha, who joined the volunteer nationalist Aidar Battalion last year, is also suspected of participating in a shooting attack on a traffic police post in Bykovnya which took place on May 2.

The Aidar Battalion is one of several dozen volunteer militia groups which were formed following the Maidan coup last year; since then it has been placed under the command of the Ukrainian Ministry of Defense. Amnesty International and the OSCE have accused the battalion of human rights abuses and war crimes against civilians in eastern Ukraine.

Zaverukha, who is known among Ukrainian social media users for her neo-Nazi views, is believed to have participated in the May 2, 2014 attacks at the Odessa House of Trade Unions which resulted in the burning and shooting deaths of several dozen anti-Maidan activists. She is also suspected of attempting to destroy a thermal power station in militia-controlled Luhansk, and of attempting to organize the robbery of the office of a Russian firm operating in her home city of Vinnitsa, central Ukraine. In March, a video appeared showing Zaverukha shooting an RPG into a village in Donbass 'just for fun'.

Last year, Zaverukha had become somewhat of a media darling in both the Ukrainian and foreign press, and even glorified as "Ukraine's Joan of Arc." Late last year, fashion journal Elle France was forced to issue an apology after publishing a stylized photo of Zaverukha in their magazine. Stating that they were "shocked to learn…the true ideological beliefs of this woman," the journal stated that they "vigorously condemn all and any xenophobic, anti-Semite, racist and Nazi ideologies."

Social media users and commentators are now asking whether Ukrainian Internal Affairs Minister Arsen Avakov, an avowed supporter of the volunteer battalions operating in the so-called 'anti-terrorist operation' in eastern Ukraine, will have the fortitude to carry through the cases against the cop killers through to conviction.

Ekaterina Roshuk, the former Managing Director at The Kyiv Times, commented on Zaveruha's case in a Facebook post, noting that Zaverukha had "long 'terrorized' the city, with no one able to do anything about her. The police were afraid to touch a hero of the Anti-Terrorist Operation, which in turn was used as license to engage in lawlessness."

"The Nazi mutt Vita Zaverukha has been caught! She has been arrested!"

Roshuk noted with worry that "if the 'heroes' are doing this in Kiev, what are they doing in the zone of the Anti-Terrorist Operation, where there are no 'bad' Ukrainian police, but only the 'Russian world' vs. heroes?"

Commenting on the mushrooming of armed volunteer battalions all across Ukraine, the journalist also stated that "until the monopoly on the use of force is returned to the security organs, life will be dangerous. And the police, the Security Service and the military prosecutors have A LOT of work to do."

West Must Influence Kiev to Eradicate Neo-Nazism in Ukraine – Diplomat