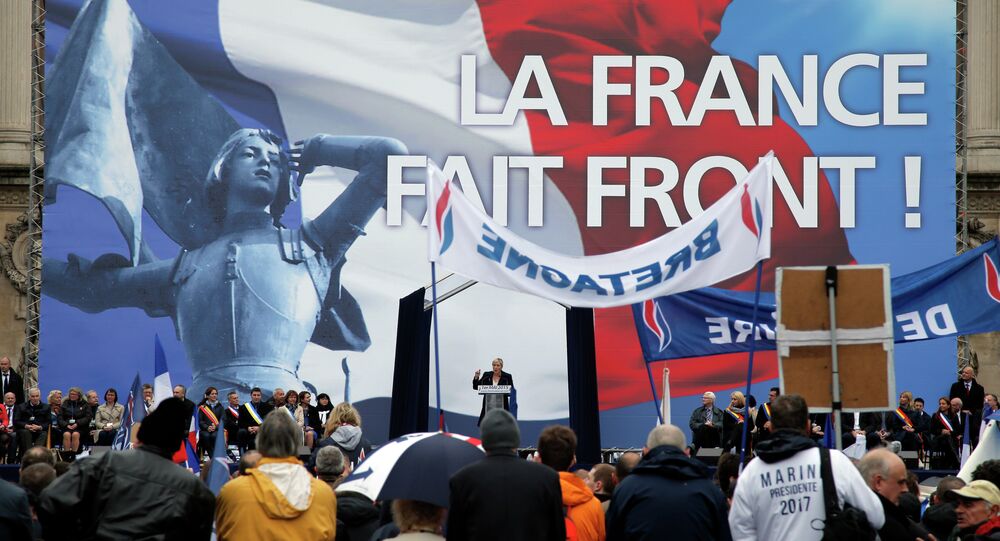 France's right-wing Front National Party - already reeling from the rift in the Le Pen family - is now facing charges of electoral fraud in the latest in a stream of problems it has faced since its foundation.

The rise of the Front National dates back to its creation, under the youthful Jean-Marie Le Pen, who was its leader until his resignation in 2011. In its early years, it failed to find a voice that proved popular with voters — polling only 0.5 percent in the 1973 elections.

So, within two years of its inception the Front National was faced with a new rival on the far right, the Party of New Forces (PFN), which was founded by FN dissidents unhappy with Le Pen's leadership. The rivalry between the two parties continued for years and culminated in 1981 with both Le Pen and Pascal Gauchon of the PFN declaring their intentions to run.

However, the race was won by a huge margin, by the socialist François Mitterrand, who called a snap election and steamrollered his Parti Socialiste into power for the first time in the history of the Fifth Republic. Le Pen's party only polled 0.2 percent and the PFN fared worse and spluttered away.

The party finally broke through into mainstream politics in 1984, winning ten seats in the European Parliament and in 1986 won 35 seats in the National Assembly. Le Pen was going from strength to strength, and in 1988, he polled 14.4 percent in the presidential elections.

In the coming years he enjoyed growing popularity against the backdrop of the growing concerns over Islamic fundamentalism, and the fatwa against Salman Rushdie by Ayatollah Khomeini. By 1997, it was the third major force in politics in France.

But it was all going to come to an end for Le Pen, who disagreed with some of his senior party colleagues and who went off to form another party, the Mouvement National Républicain (MNR) taking away half of the Front National's membership. To make matters worse for Le Pen, one of his daughters, Marie-Caroline, followed her husband to join MNR.

Le Pen himself had courted controversy through the years. In May 1987, he advocated the forced isolation from society of all people infected with HIV. He was accused and convicted several times at home and abroad of xenophobia and anti-Semitism and made several provocative statements interpreted by the legal system as constituting Holocaust denial. Le Pen was further ridiculed after his marriage broke down and his ex-wife posed nude in the French edition of Playboy.

Beginning of the End

By 2007, after fighting that year's elections, the party was in financial trouble. Le Pen was forced to sell the HQ of the Front National as well as his personal armoured car. Twenty of his permanent staff were dismissed the next year. He announced he would retire by 2010 and spent the next two years awaiting retirement.

His daughter Marine Le Pen took over in 2011, but things started to go awry straight away as she softened the party's line on xenophobia and became more popular. She was the new star on the rise. In two polls in 2013, Marine Le Pen polled ahead of President François Hollande. By 2014, the party had gained 24.86% of the vote in the European Elections and 24 of France's 74 seats. It was a huge success and a shock to many in the centre and on the left.

But then, the Le Pen magic started to wear off and another father-daughter spat began. In April 2015, Le Pen reiterated his past comments that the Nazi gas chambers were a mere detail of history and his daughter suspended him from the party. Some say she pounced on his comments to suspend him so that he posed no threat to her bid for political power, having moved the party more mainstream.

He denounced her and told her to marry so that she could no longer have the family name and said it would be "scandalous" if his daughter won in the 2017 elections after the way she treated him. Today, as Marine Le Pen faces a party row over election fraud, her father's dream lies in tatters.