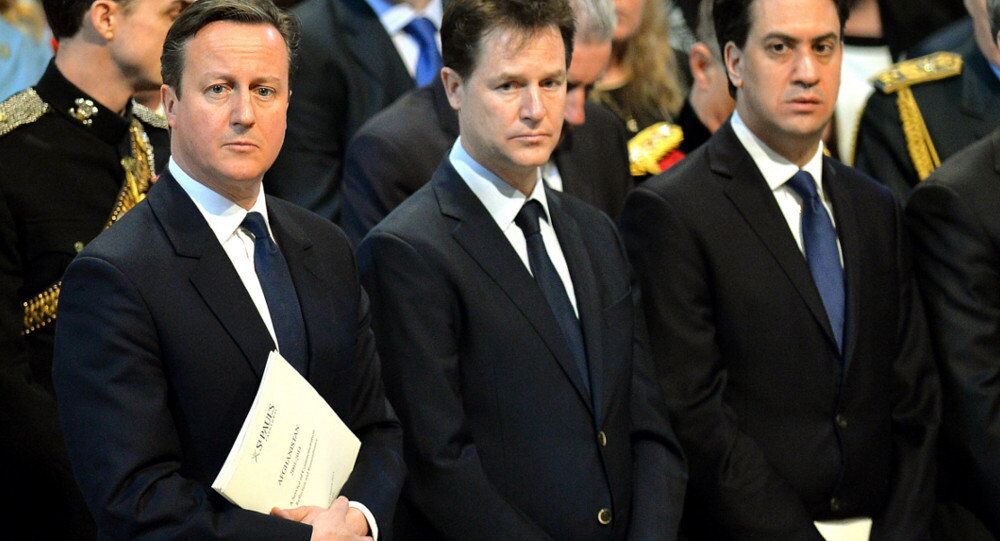 In the rundown to UK's general election, party leaders have been vigorously sharing their campaign messages on social media, reaching out to thousands of their followers/potential voters. And as election campaigning enters the final straight, party chiefs will be counting on every like and retweet.

The Conservatives leader David Cameron tried to simplify not only his campaign message, it seems, but also his outfit in a video posted on his Twitter page.

With one day to go, I'm crossing the country with this simple message of why people should #VoteConservative: https://t.co/glGhVZJPuF

Meanwhile, Nick Clegg, leader of the Liberal Democrats, chose to share on Facebook the following video of him addressing his supporters in Sheffield during his UK campaign tour.

The LibDems also brought attention to the advantages of having a coalition government, tweeting:

We have a plan to rescue the NHS: more nurses, more doctors, more midwives. RT so people know we’ll save the NHS → pic.twitter.com/d8MJupL4sX

While the Scottish National Party chief, Nicola Sturgeon, in a video message on the SNP Facebook page, highlighted what the "general election means for Scotland".

Make Scotland's voice heard more loudly than ever before

This is our opportunity to make Scotland's voice heard more loudly than ever before.The more seats the SNP wins, the more we can influence decisions taken in Westminster. My vow is to make Scotland stronger at Westminster.So please, #voteSNP on Thursday, May 7th.

One of the main points of contention, the renewal of the Scotland-based Trident nuclear program, was recalled on SNP's Twitter account as well:

"It is time to say No to wasting £100billion on Trident" #GE15 #VoteSNP pic.twitter.com/KFmUXOZJeY

The Green Party shared on their Twitter page a video of leader Natalie Bennett explaining how the Greens are different from all other parties.

'We're the only party that opposes fracking and road-building and airport expansion' @natalieben #VoteGreen2015 https://t.co/bTkfYUWtCg

And for all those thirsty for change, UKIP leader Nigel Farage offers — no, not a pint of beer, but to vote for him instead.