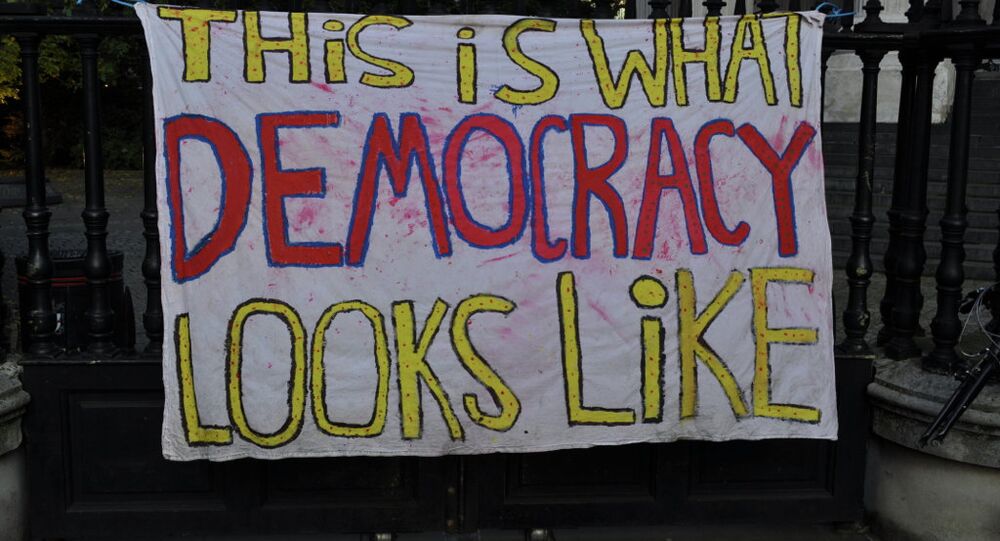 Three activists were arrested in London on Monday as the Occupy Democracy rallies is underway in the UK cities, one of the organizers told Sputnik.

"There were few arrests, actually. Three people were arrested for sitting in a symbolic tent place," George Barda told Sputnik.

Barda explained that it was recently outlawed to set up tents for protest actions.

"Parliament Square [in London] was built for democratic assembly," Barda said, adding that one of the demands of the Occupy Democracy is to tackle corruption.

Prior to the arrests, police surrounded protesters who were sitting in a tent.

Police have taken the tent but we're continuing with the day's plan. Asad from @FoEint talking climate crisis pic.twitter.com/i3fiukaBNo

Ten police now arresting each person in the tent at @OccupyDemocracy #FestivalOfDemocracy Police have confiscated the tent.

Earlier in the day, the activists dressed the statue of Gandhi in a tarpaulin shawl, calling for the criminalization of fossil fuel exploration.

"The authorities don't seem to like either occupy or democracy…" the group tweeted.

The Occupy Democracy campaign is set to run from May 1-10.

The movement advocates democracy free from corporate control that would help people and the planet on the whole, according to the group's website.

The group's main demands include reforming party funding and the media, abandoning policies driven by economic interests, the introduction of proportional representation and a citizen-led constitutional convention for democracy.