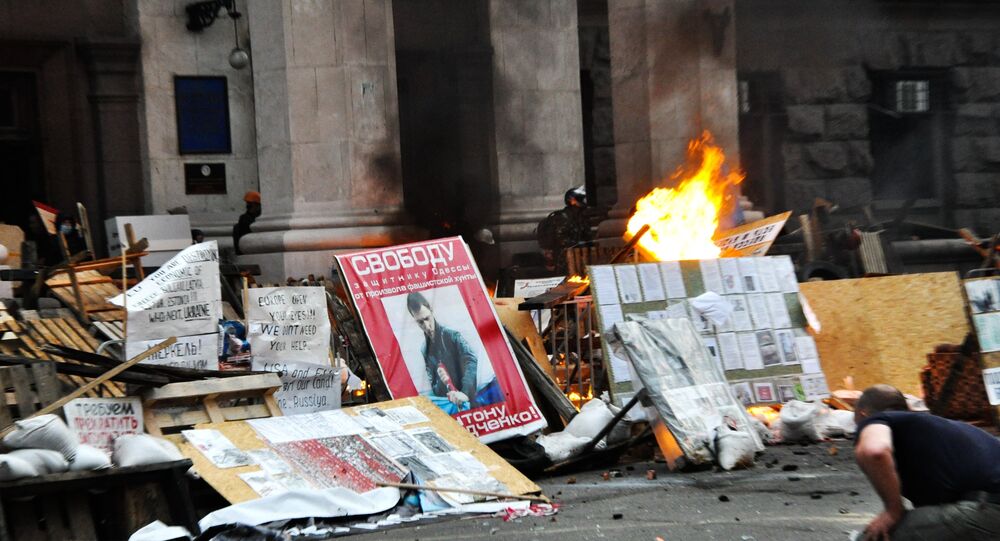 May 2 marks the one year anniversary of the Odessa Massacre that claimed the lives of 48 people, burned to death by groups of pro-Kiev radicals. Not everyone is grieving, however. Ihor Mosiychuk, an MP from Ukraine’s Radical Party, hailed the murderers, saying Ukrainian “patriots” had their first victory in Odessa.

Saturday marks the one year anniversary of the Odessa Massacre, during which several dozen anti-Maidan activists were burned to death by groups of Ukrainian ultra-nationalists in the city of Odessa.

It was the awful tragedy that claimed the lives of 48 people. However Ukrainian MP Ihor Mosiychuk certainly did not think so. Mosiychuk called the May 2 massacre a good day for Ukraine, when "Ukrainian patriots" defended their country from "occupants and collaborationists."

"Without regard for their own lives, patriots cleared out Odessa from devils and turned the city into Ukraine's southern outpost on the Black Sea," the Verkhovna Rada deputy shared on social media, adding that the Odessa Massacre was "Ukraine's first victory over its long-standing enemy".

Earlier this week, another political figure, Vaclav Bartuska, the Czech Republic's energy envoy, spoke about the massacre in a good light. Bartuska justified the slaughter, stating that Kiev did a good job killing independence activists in Odessa, otherwise they would have organized civil unrest, trying to break-away from Ukraine.

© AP Photo / Vadim Ghirda
One Year After Odessa Massacre in Ukraine: How Tragedy Unfolded (VIDEO 18+)
On May 2, 2014, Ukrainian right-wing football fans attacked anti-Kiev protesters, camping in the square outside the trade unions building in central Odessa. The football hooligans were soon joined by Maidan activists, who supported the pro-EU February protests in Kiev, and members of the hardline Right Sector group.

Heavily outnumbered independence supporters hid inside the trade unions building, where they became trapped by the angry crowd that set the building on fire by throwing Molotov cocktails through the windows.

Many people jumped to their death trying to escape the fire, while others were finished off by the crowd, according to eye-witness accounts. At least 48 people died, and more than 200 were injured during the incident.