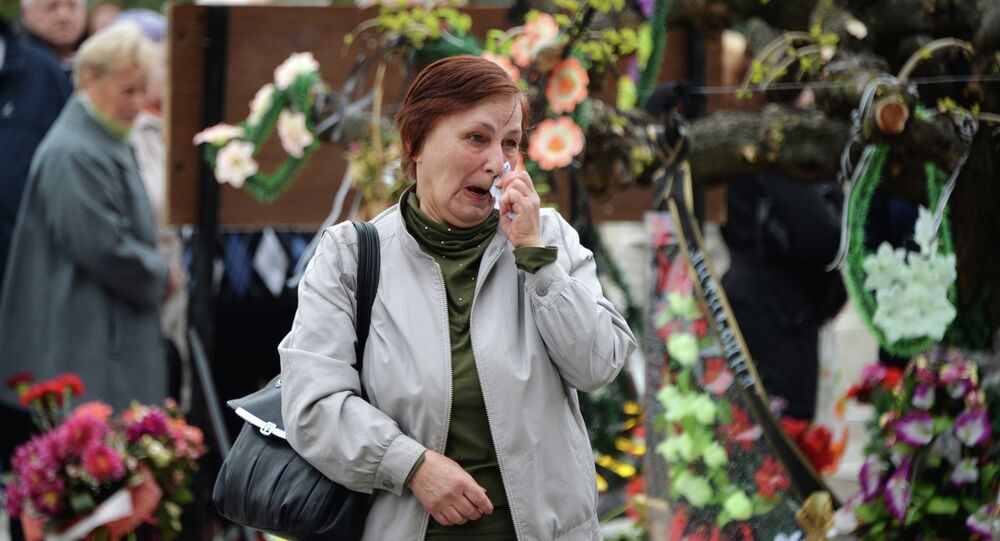 One year ago pro-Kiev nationalists burned 48 people alive; those who survived fire were killed with knives or guns.

MOSCOW (Sputnik) — The self-proclaimed people's republics of Donetsk and Luhansk (DPR and LPR) are commemorating on Saturday the victims of 2014 Odessa Massacre.

Saturday marks exactly one year since pro-Kiev radicals blocked anti-government protesters in Odessa's House of Trade Unions and set the building on fire by hurling Molotov cocktails inside. The tragic incident saw at least 48 people killed and over 200 injured.

© AP Photo / Vadim Ghirda
One Year After Odessa Massacre in Ukraine: How Tragedy Unfolded (VIDEO 18+)
The representative of Donetsk Information Agency told RIA Novosti earlier in the day that remembrance events are being held across Donetsk Region, with drivers sounding their car horns in memory of those who were killed in Odessa on May 2, 2014.

According to Denis Miroshnichenko, the Chairman of the Association of the Lugansk Youth, various commemorative events are being held in the city of Lugansk and elsewhere in the region.

On May 2, 2014 pro-Kiev radicals and Right Sector militia blocked the anti-government protesters in the House of Trade Unions and set the building on fire, using Molotov cocktails. Many people jumped to their deaths in an attempt to escape the inferno, while others were finished off by the crowd outside, according to eye-witness accounts.

© AP Photo / Vadim Ghirda
Ukraine Deports Italian Journalist for Odessa Massacre Truth
At least 48 people died, and over 200 were injured as a result of the fire. Local officials accused Kiev of covering up the actual death toll of at least 116.

Moscow has been urging Kiev to conduct a prompt and transparent investigation into the Odessa tragedy since the day of the deadly fire.

One year after the tragedy, Kiev authorities have not completed the investigation of the case and perpetrators have not been brought to justice.