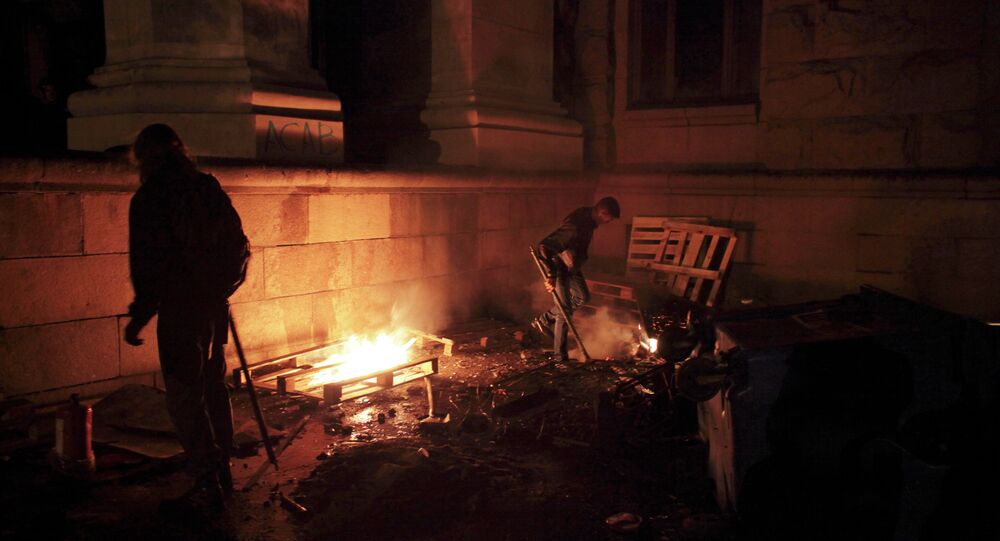 One year following the Odessa Massacre, which resulted in the deaths of 48 people, most of them anti-Maidan activists, Ukrainian investigators are yet to offer any signs that they intend to carry out a thorough, objective investigation.

© AP Photo / Vadim Ghirda
International Community Must Pressure Kiev for 2014 Odessa Massacre Report
Saturday will mark the one year anniversary of the Odessa Massacre, a series of clashes between Ukrainian nationalists and anti-Maidan activists which culminated in the burning to death of several dozen anti-Maidan activists at the House of Trade Unions building in Central Odessa.

Despite an overabundance of photo, video and other evidence, local rights activists have complained about investigators' sluggishness and Kiev's politicization of the investigation.

For instance, Ukraine's Vesti has recently reported that despite the participation of thousands of demonstrators from both sides, only 22 cases have been opened, all but one against anti-Maidan activists. The one pro-Maidan activist who faces trial, Sergei Hodiyak, is accused of the shooting death of anti-Maidan protester Evgeniy Losinskiy, and of attacking a police officer. Hodiyak has pled not guilty, and has the support of Radical Party MP Igor Mosiychuk, who calls Hodiyak a political prisoner and has promised that he would do everything to "cease the harassment of a patriot protecting Odessa from separatists."

The Group of May 2, a group of forensic and other experts, journalists and local social leaders has launched their own independent inquiry into events running parallel the government's investigation.

The activists have condemned authorities for their biased and incomplete investigation, criticizing local security organs for the destruction of evidence and their lack of details in interviewing witnesses. The group has also challenged the official version of the cause of death of those who perished in the House of Trade Unions building, toxicologist Vladimir Sargasyan's analysis finding that the majority were killed by carbon monoxide and burns, not by inhalation of mysterious poisonous gases. They have interviewed over 120 eyewitnesses and victims not questioned by investigators, compiled a detailed reconstruction of events, and launched a criminal investigation against the regional Directorate of Emergency Situations for their ineffective response on the day of the tragedy.

© Photo : Odessa-media
Burn, Kill, Bury: Czech Diplomat Condones Slaughter of 48 in Odessa
Regarding the cases filed against the anti-Maidan activists, Group of May 2 coordinator Tatiana Gerasimova has noted that "indictments are copy-pasted, with only photographs and biographical data being changed. This is not correct; after all, every person is different, as were their actions that day."

An investigation by Vesti.Reporter has also challenged government investigators' central claim that both sides were equally responsible for the House of Trade Unions' building fire. Reconstructing the situation that day, Vesti.Reporter was able to determine that by the time when the fire began, anti-Maidan activists had already been scattered; most of the activists hiding in the building were women and old men, with no more than 20 younger activists facing hundreds of pro-Maidan activists and football hooligans.

"For this reason, the throwing of Molotov cocktails into the House of Trade Unions and the deaths of several dozen anti-Maidan activists cannot be justified, and cannot even be marked down to 'coincidence'. A real investigation into the crime is thus still waiting to see the light of day," Vesti.Reporter explained.

Ukrainian media have been reporting on the unprecedented precautions taken by municipal and regional authorities in preparation for the anniversary of the events of May 2. Up to 2,800 police, in addition to 500 personnel from other security organizations and volunteer units are being mobilized in the city. Armored cars and infantry fighting vehicles are set to reinforce them.

Governor Ihor Palytsa told press that "we will respond firmly, and sort out whether the detention was lawful or not later. Those who might look even a little similar to the faces on wanted lists will face checked, so its best to carry [your] passports." Ministry of Internal Affairs Chief Ivan Katerynchuk added that anyone wearing balaclavas or St. George Ribbons will be detained.

Officials have already arrested 12 persons listed as "terrorists" ahead of the anniversary, including 54-year-old Lyubov Davidchenko, mother of Antimaidan activists Anton and Artem Davidchenko, who have fled to Russia, along with opposition journalist Artem Buzila.

The Russian Foreign Ministry criticized Kiev Friday for its stalling of the investigation into the tragedy, calling on the world community to demand a thorough and impartial investigation. The Ministry noted that it is "with deep sense of concern we have to state that one year on, the Ukrainian [authorities] have not taken any tangible steps toward an objective, independent and impartial investigation of this horrific crime with the aim of bringing the perpetrators to justice."