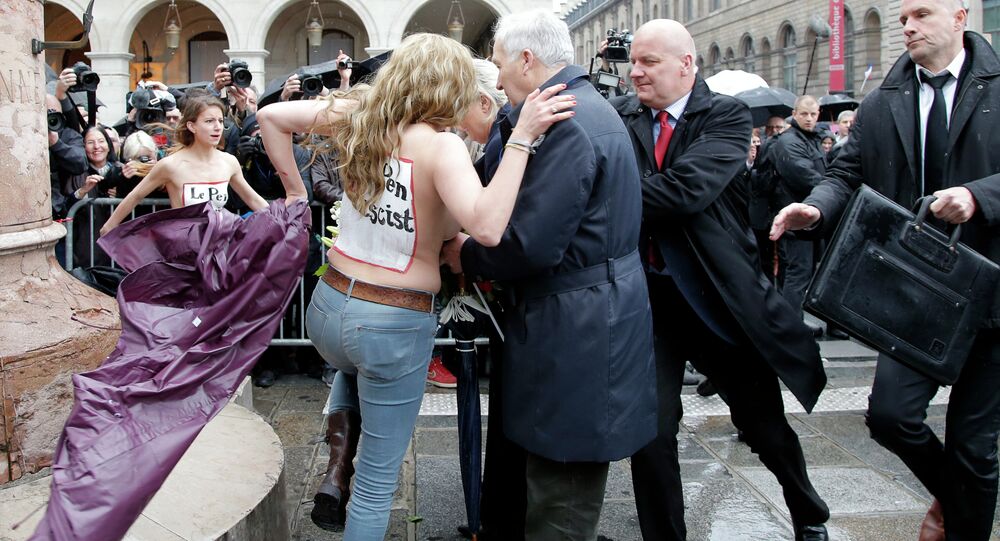 PARIS (Sputnik) - Topless activists from the Femen movement interrupted an address given by Marine Le Pen, the leader of the French right-wing National Front party, accusing her of ultra-nationalism, a RIA Novosti correspondent reported Friday.

Three bare-chested female activists appeared on the balcony of a neighboring house a few minutes after Le Pen commenced her speech. The women had "Heil le Pen" written on their chests.

The women also held Third Reich-style flags with National Front symbols on them, performed Nazi salutes and screamed through megaphones.

Le Pen had to interrupt her speech for a few minutes while security detained the activists.

Earlier in the day, Femen activists had also tried to prevent Le Pen laying flowers at a Joan of Arc monument.

Marine Le Pen is running in the 2017 presidential elections in France. She is expected to perform well at the ballot, as her party finished second in France's departmental elections in March.

Femen is a radical feminist group which was founded in Ukraine in 2008 and now based in Paris. The group has become famous for its activists protesting topless against a wide range of issues, including gender, religion, homophobia and sexism, as well as on international topics.