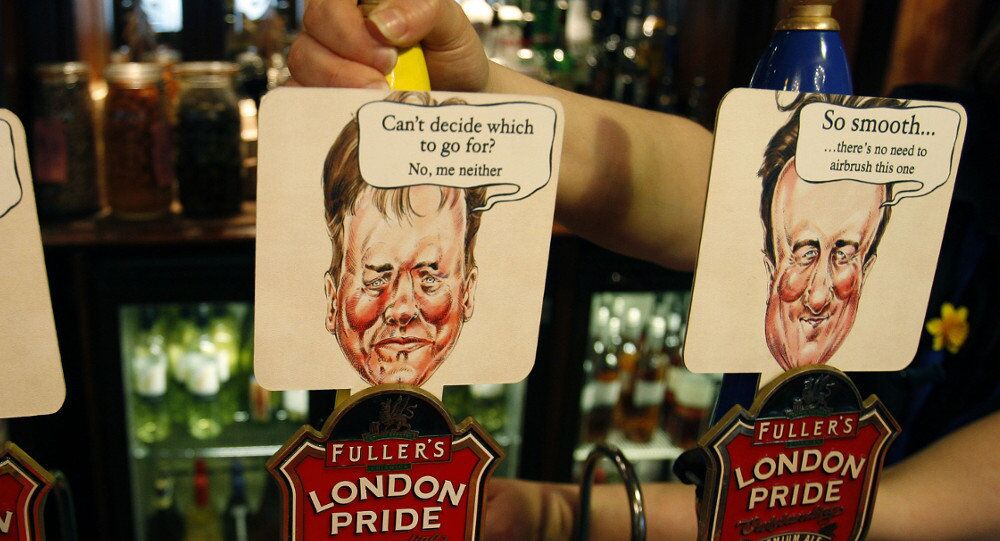 With just days to go until the British general election - it seems there's one policy the leaders of the Conservative and Labour Party agree on - and that's beer.

The final Cabinet meeting of the coalition government was even marked with a bottled brew, labeled 'Co-ale-ition Beer' and bearing pictures of David Cameron and Nick Clegg. The ale was brewed in Witney — Cameron's constituency.

© AP Photo / Lefteris Pitarakis
Nigel Farage Up Against 'The Pub Landlord' In UK General Election
So, it appears lining the stomach of the final stages of political campaigning is the Campaign for Real Ale (CAMRA) and they pledge "to stand up for Britain's pubs, breweries and beer drinkers."

Nigel Farage — never shy of a soundbite or a photo opportunity, is frequently pictured down the pub, drinking a pint — however, it's Labour which has been revealed as the most beer and pub friendly political party.

In a letter to CAMRA, Labour Leader Ed Miliband said:

"In government, we will ensure that the new 'Pubs Code' has teeth, and give communities the power to protect their local pubs and other cherished establishments from being bought up and turned into supermarkets — a fate that has affected two pubs a week in recent years — by allowing local authorities to determine development rules and changes to the permitted 'uses' of buildings locally."

Second, in the drinking round is the Green Party, with 264 possible candidates siding with the strong stuff. Green Party leader Natalie Bennett has gone on record, as saying: "I'm supporting CAMRA's manifesto for pubs and real ale, as is the whole Green Party."

We love this bespoke Co-Ale-Ition beer given to ministers at their final cabinet meeting! http://t.co/h3pFURRAB5 pic.twitter.com/sitBln2VEh

Next up at the bar, in third place, are the Liberal Democrats, with 225 candidates. The party's manifesto pledges support for planning protection for pubs — which according to CAMRA, is a huge loophole in the current planning system, promising to "protect community assets like pubs by bringing forward a Community Right to Buy."

© Photo : Pixabay
Last Call? Are Immigrants to Blame for the Closure of British Pubs?
In fourth position is the Conservative Party, with 160 prospective candidates pledging their support behind a real pint. In a letter to CAMRA, Conservative Party leader David Cameron committed a future Conservative government to "extending the length of time communities have to purchase these assets [pubs] and require owners to set a clear 'reserve' price for the community to aim for when bidding."

"We will also set up a Pub Loan Fund to enable community groups to obtain small loans.

"Conservatives believe strongly that pubs are at the heart of communities, supporting local jobs and boosting the local economy. They play a crucial role in the social and economic life of our nation," said the prime minister.

Surprisingly, in fifth place, with 118 candidates is the UK Independence Party. Its leader, Nigel Farage recently included a beer festival in Kent to his campaign trail.

When you can see Nigel Farage in the pub laughing and drinking pints with men that said they'd be voting for u pic.twitter.com/mifNxlvt5E

Tim Page, CAMRA Chief Executive said:"With more than 170,000 members, CAMRA is the largest beer consumer group in Europe and we are uniquely placed to represent the views of beer drinkers and pub-goers in the UK. Whilst CAMRA remains strictly non-party political, we are pleased that in recent years Parliament has listened to our concerns and made some positive steps towards growing the British beer industry. It is extremely heartening to see over 1,000 prospective MPs now pledging their support for our campaigns should they be elected.

"With 29 pubs closing per week it is clear that much more needs to be done to help this industry not just survive, but thrive. We want to see the next government grant planning protection to all pubs in England, freeze beer duty for the whole Parliament and support small cider producers."

It might be the end of the Co-ale-ition, but with just days to go until the general election, the hangovers haven't even begun.

Last Call? Are Immigrants to Blame for the Closure of British Pubs?