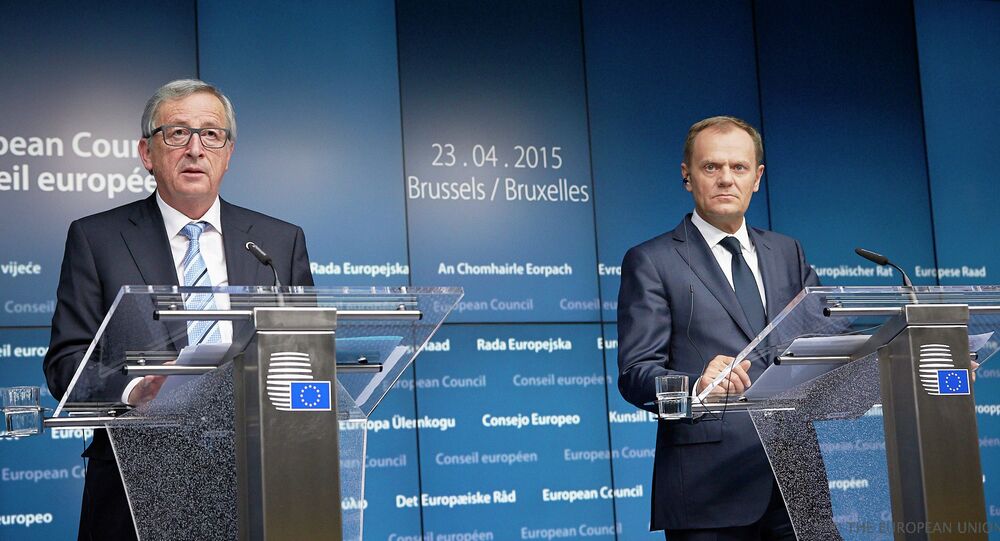 "To date, the European Union's collective response to its growing migrant crisis has been ad hoc," says the European Council on Foreign Relations.

Responding to the crisis on Europe's doorstep, European Commission President, Jean-Claude Juncker, and European Council President, Donald Tusk, held a debate to discuss actions the EU is taking to end the mass drowning of migrants in the Mediterranean.

Saving lives of innocent people priority no. 1 for #EUCO. Challenge for all of EU. Agreed concrete actions in 4 areas http://t.co/r6RlSBEXCE

Addressing the European Parliament for a debate to end what Donald Tusk called the "dramatic situation in the central Mediterranean four days after 800 people were lost at sea," he also pointed out that "they were not the only casualties in the last week."

"It's not just a challenge for southern Europe, but the whole of Europe. We are facing a difficult summer ahead. Saving the lives of innocent people remains a priority. In the short term it's about stopping the smugglers putting thousands more lives at risk."

President Tusk said that confronting the "cynical callous and often violent" smugglers was a priority.

"They take the life savings of the desperate and leave them to drown in the sea. At worst, they place vessels in dangerous situations. We need to identify, capture and destroy smuggler's vessels before they are used.

"The best way to protect people from drowning is to ensure they do not get on the boat in the first place," said Tusk.

The @EU_Commission is deeply chagrined by the tragic developments in the Mediterranean. Our actions must be bold http://t.co/zKI8SkY7jL

Amongst other measures mentioned in the meeting, Tusk reiterated the tripling of financial resources to combat the mass drownings and more protection put in place for refugees.

"This is a difficult and sensitive debate. This includes full and effective implementation of an asylum system with the same standards in all member states, and an increase in emergency aids and support teams to help process asylum claims."

He did, however, welcome the tripling of funding which he said "has been beefed up to 220 million euros" — precisely the extent of the Mare Nostrum budget.

"We're catching up and making up for the temporary cut which resulted from the end of Mare Nostrum and cost human lives."

"We are not dangerous. We are in danger" — message from migrants in Brussels ahead of EU leaders migration summit pic.twitter.com/eBsx96v0b3

Italy alone had financed the Mare Nostrum rescue operation for smuggled migrants at sea. But following the recent drownings and emergency meetings, it has been agreed that funding Mare Nostrum will come from the EU budget with a national contribution from member states. Juncker called this "a return to normality" adding that it was anything but normal to leave it to Italy alone to fund.

"It's one thing to tackle the symptoms of the crisis, as President Tusk said. Everything possible must be done to stop unfortunate people taking these awful boats.

"We have to be able to save human lives in the places from whence they come, to stop those same human lives ending up on the high seas — that means an increase in development aid."

Juncker proposed that refugees must be shared geographically across the EU:

"This is all about shared solidarity."

Matthew Gibney, Professor of Politics and Forced Migration at Oxford University, agrees: "The provision of asylum should be conceptualised as a shared responsibility of European states with responsibility for refugees shared equitably between them. Migration avenues and access to asylum are absolutely central features of a root-cause based response to the current displacement crisis faced by Europe and its neighbours."

Following the 2011 Arab Spring, thousands of Tunisians began to illegally arrive on the Italian island of Lampedusa. An island which gained notoriety after a boat that had set sail from Libya, carrying migrants from Eritrea, Somalia and Ghana, sank in 2013.

The Council on Foreign Relations says:

"Political upheaval in the Middle East and across Africa is reshaping migration trends in Europe."

Many Sub-Saharan Africans — who would have previously migrated to Libya — are now fleeing unrest in the post-Gaddafi era.

Juncker told the European Parliament: "We have to be sure that we deal with the tricky questions of legal migrations. We have to leave the door partly ajar. If we don't open the door to legal migration, then the unfortunate people of the world will be climbing through our windows.

"I have been calling for legal migration, but I wonder if they're still calling for it in a few months' time when the subject is less fashionable."

"European countries cannot be the only destination for poor people from across the world. People are escaping poverty and taking boats and we have to make sure they do not drown on our coasts," said Juncker.

© Flickr / Photo Unit
EU Refugee Crisis Made by... the EU

Migration is not just a "fashionable" subject — but a highly political one. No more so than in the UK with just days to go until the general election on May 7.

According to the Council on Foreign Relations: "With nationalist parties ascendant in many member states and concerns about Islamic terrorism looming large across the continent, it remains unclear if political headwinds will facilitate a new climate of immigration reform."

And no other to respond at the European debate was Britain's Nigel Farage, leader of the UK Independence Party (UKIP).

"The Common migration policy proposed by Brussels lays out definitions for asylum so wide that they could include people fleeing not only war but poverty. A colossal change that opens the EU to levels of immigration from Africa and elsewhere that are unimaginable.

"It [the migration policy proposed by Brussels] fails to account for ways to distinguish between genuine asylum seekers and those who wish to do the UK and the countries of Europe harm."

The UKIP leader claimed that half a million Islamic extremists could cross the Mediterranean and gain access to the UK as a result of European Union policies that could be implemented to address the migrant boat crisis.

When ISIS says they want to flood Europe with half a million Islamic extremists they mean it. EU migration proposals do nothing to stop it

"It is a fact that Islamic State has bragged about wanting to flood Europe with half a million extremists, posing a direct threat to the West that must not be ignored. A threat that has been highlighted and repeated by senior UK security officials.

"Instead of ceding control of our borders, Europe and the UK would do better to emulate the Australian Prime Minister and stop the migrant boats from coming.

"Stopping the boats is the only sure fire way of stopping the drowning."

However, Professor Gibney says the best Europe can do is, "where possible, to search for fair and peaceful political solutions to conflicts; provide development assistance where appropriate and access to legal temporary and medium term economic migration to Europe; and, finally, provide asylum to those who need protection because of threats to their human rights."

EU border agency Frontex says there were approximately forty thousand illegal border crossings along the Mediterranean route in 2013. It's believed the majority of the 3,279 Mediterranean migrant deaths in 2014 also occurred along this route.

The International Organization for Migration says that the toll could reach 30,000 by the end of 2015.

Hundreds Protest in London Against EU Inaction Amid Migrant Crisis