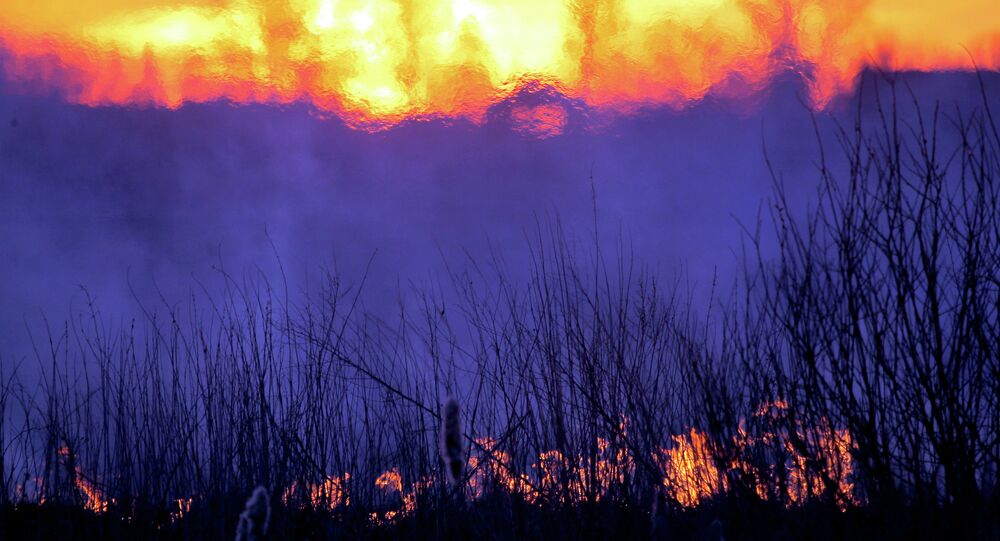 The forest fire is being fought by more than 200 firefighters, National Guard was put on high alert.

A forest fire has erupted in the Chernobyl Exclusion Zone. More than 200 firefighters, 15 fire engines, two aircraft and one helicopter are battling the fire, according to Ukraine's acting emergencies minister Zoran Shkiryak.

Ukraine's Interior Minister Arsen Avakov wrote on his Facebook page that as of 6:30 PM Kiev time (3:30 PM GMT) the situation had gotten worse and the fire was approaching the Chernobyl nuclear plant.

© Sputnik / Alexei Furman
Chernobyl: Remembering the Worst Human Made Disaster
11
"The forest fire is heading in the direction of Chernobyl's installations. Treetop flames and strong gusts of wind have created a real danger of the fire spreading to an area within 20 kilometers of the power plant. There are about 400 hectares [988 acres] of forests in the endangered area. The Prime Minister has called an urgent session of the emergencies commission. National Guard and Interior Ministry forces have been put on combat alert", Avakov's statement reads.

Earlier, Ukrainian authorities reported three forest fires in the vicinity of the Chernobyl plant, but said they did not pose a threat to local residents nor to the NPP. The total area of the fires covers an estimated 400 hectares.

"After traveling to the exclusion zone the prime minister told reporters at the airport that the situation is under control. Areas engulfed in flames are located at a distance of about 20 kilometers from the Chernobyl nuclear power plant," a statement on the Ukrainian government’s website said.

According to the statement, Yatsenyuk has stressed that the authorities are tackling the situation despite the fact that the fire is the largest seen since 1992.