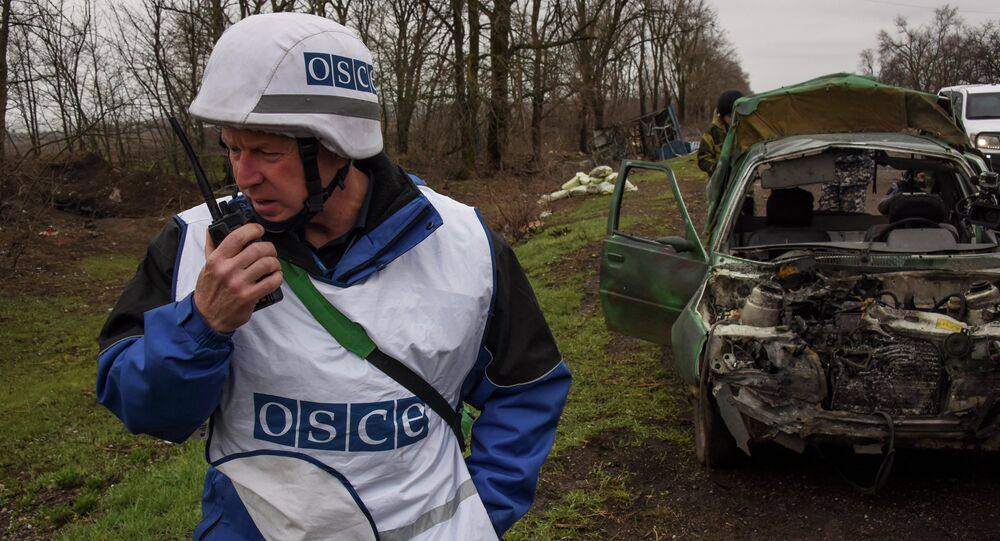 The observers from OSCE Special Monitoring Mission deployed in Ukraine have detected sporadic and continuous shelling around the southeastern village of Shirokino.

MOSCOW (Sputnik) – The Special Monitoring Mission (SMM) of the Organization for Security and Co-operation in Europe (OSCE) deployed in Ukraine has detected sporadic and continuous shelling around the southeastern village of Shirokino, the observers said in a spot report.

"On 26 April, the SMM observed what it assessed to be the most intense shelling in Shirokino (20km east of Mariupol) since fighting began in the area in mid-February 2015," the Sunday spot report said.

Shirokino (Shyrokyne) is a village located in Ukraine's southeastern region of Donetsk. It was considered neutral territory in the internal armed conflict which started in the area in April, 2014, before it was occupied by Kiev forces at the beginning of February.

On February 12, after 16-hour talks between the leaders of Russia, Germany France and Ukraine, Kiev forces and independence fighters of the self-proclaimed people's republics of Donetsk and Lugansk (DPR and LPR) signed a breakthrough peace deal in the Belarusian capital, Minsk.

© Sputnik / Gennady Dubovoy
Update: One Journalist Dead, Second Wounded Following Ukrainian Artillery Fire Near Donetsk
Apart from a full ceasefire, the agreement stipulates, among other things, the establishment of a secure buffer zone in southeastern Ukraine through the withdrawal of heavy weaponry from the line of contact between Kiev forces and DPR and LPR militia and an all-for-all prisoner exchange.

The OSCE has been tasked with monitoring the situation in southeastern Ukraine, which remains tense, as both sides continue to accuse each other of violating the Minsk agreements.