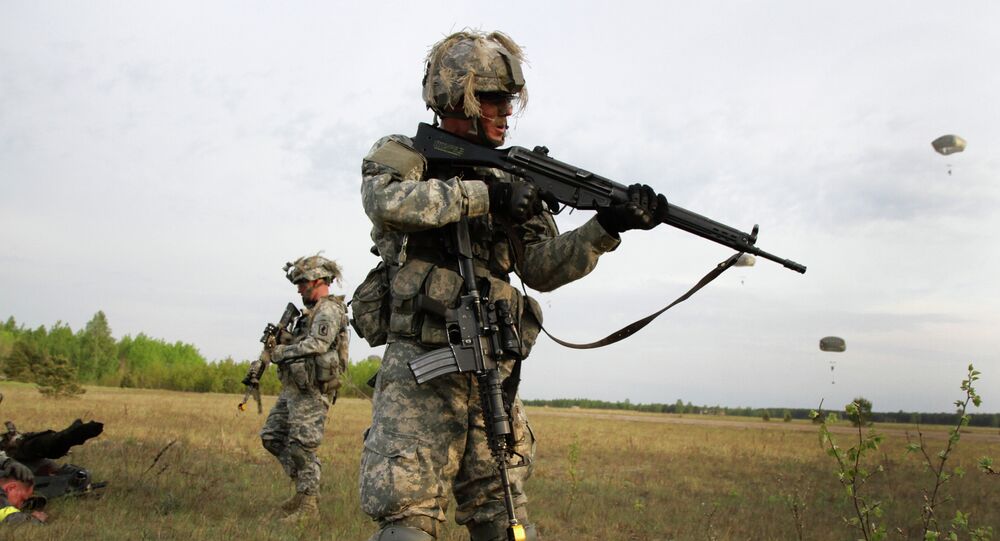 The joint military drills held by the US paratroopers and the Ukrainian National Guard are taking place in urban environments in eastern regions of Ukraine close to the conflict zone, a Russian Ministry of Defense spokesman said.

Russian Ministry of Defense spokesman Igor Konashenkov pointed out that American military instructors are holding joint military drills with the Ukrainian National Guard units not far from the conflict zone in eastern Ukraine, in the regions of Mariupol, Severodonetsk, Artemivsk and Volnovakha.

© Flickr / U.S. Army Europe Images
US-Ukraine Military Drills Risk Intensifying Civil War – Former US Diplomat
Last week nearly 300 servicemen from the 173rd Airborne Brigade arrived in western Ukraine to take part in joint military drills dubbed Fearless Guardian together with Ukrainian National Guard battalions. It was announced that the overt combat training would take place in the Yavoriv district of the Lviv region, western Ukraine. Inexplicably though, the military drills have been shifted from the West to the Ukrainian eastern region, Igor Konashenkov stressed.

Russian Ministry of Defense spokesman Igor Konashenkov called the public attention to the fact that the US-Ukrainian military servicemen are currently engaged in intensive assault training in urban environments.

The Russian Defense Ministry has repeatedly expressed its concerns about the fact the US paratroopers are teaching the Ukrainian National Guard to use weaponry manufactured in the West, pointing out that it could serve as a signal of Washington's preparedness to deliver lethal weapons to Ukraine.

Meanwhile the US Ambassador to Ukraine Geoffrey Pyatt is beating the war drums, saying that Russia is beefing up its military presence in the eastern regions of Ukraine.

"It is the highest concentration of Russian air defense forces in eastern Ukraine since August," the Ambassador wrote on his Twitter account.

Strangely as evidence for his assertion, Pyatt decided to show a photo of a Buk Missile System taken almost two years ago at the International Aviation and Space Salon MAKS in Russia.

Regardless, the Russian Defense Ministry is not surprised by the umpteenth "sensational exposure" of Russia's military build-up in Ukraine made the US State Department.

"We won't be surprised if [Washington] soon accuses us of deploying carrier battle ships in the Lugansk region or of Russian nuclear submarines illegally entering the First city pond of Donetsk," noted Russian Ministry of Defense spokesman Igor Konashenkov with unconcealed sarcasm.

It should be also noted the Marie Harf, the deputy spokesperson for the US Department of State, has repeatedly claimed that Russia is beefing up its military forces in the eastern Ukraine, while providing no evidence at all to prove the statement.