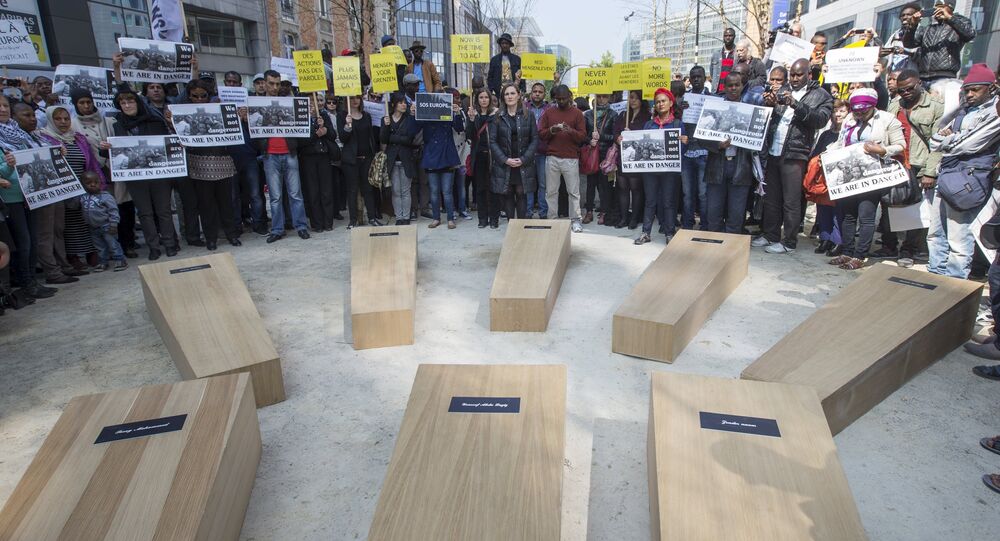 Rights Group March to Support Rescue of Migrants in Mediterranean

Human rights activists are marching in Brussels on Thursday, calling for a renewal of EU search and rescue operations to help migrants crossing the Mediterranean sea, after almost a thousand people drowned over the weekend, the group announced.

MOSCOW (Sputnik) – Reports of between 800-900 EU-bound migrants drowned trying to cross the Mediterranean when a boat capsized on Sunday. Only 28 have been rescued.

According to Amnesty International, the protest organizer, hundreds of people have joined the march. The group stated that participants will carry three empty coffins, with the march culminating outside the European Council building.

How do you think the Mediterranean migrant crisis should be handled?
Voted: 2
All polls
The march is intended to "shine the light on Europe's shameful response to the spiraling death toll in the Mediterranean," the rights group said in a statement. The protest comes ahead of an extraordinary EU summit to be held later in the day.

Earlier Thursday, European media leaked a draft summary of the summit, revealing that the bloc is unlikely to expand search and rescue operations, focusing instead on destroying boats used by human traffickers to smuggle undocumented migrants into Europe. Amnesty International called the report "illegal, impractical and immoral."

The Mediterranean Sea is one of the main routes for migrants trying to flee armed conflicts in North Africa and the Middle East. At least 3,500 people died crossing the sea in 2014, according to UN estimates.