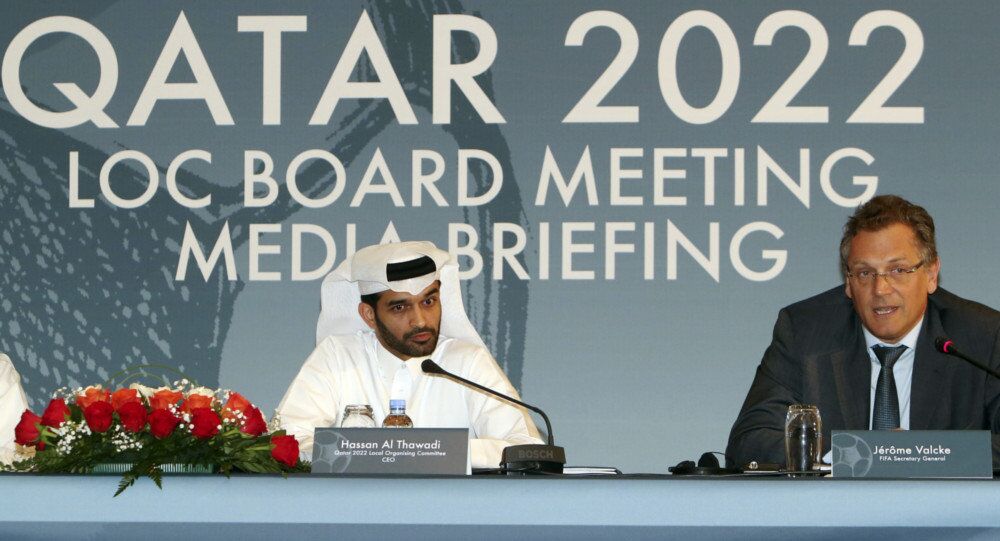 The highly controversial decision to award Qatar hosting rights to the 2022 FIFA football world cup is to be put under further scrutiny, with corruption allegations to be debated by European lawmakers, along with the release of a book claiming to contain damning evidence of malpractice within FIFA.

The widely debated allegations of corruption levelled against football's world governing body are to be discussed during a parliamentary assembly of the Council of Europe (PACE) sitting in Strasbourg, and come amid mounting calls for Qatar's hosting rights of the tournament to be stripped.

PACE officials have been among the most vocal critics of FIFA, with a report released in January claiming the original voting process for the 2022 tournament was "radically flawed" due to bribery and corruption.

The report, which will be debated by members, took into account evidence gathered from a variety of sources, including a special investigation undertaken by journalists from British newspaper, The Sunday Times. Author of the PACE report, Michael Connarty said:

"There is serious evidence of bribery that I've seen. It shows that the process for 2022 was corrupt, and [that is] enough to invalidate that procedure by FIFA's own rules."

Last year, The Sunday Times investigation into the decision to award Qatar the event uncovered millions of documents and communications that seemingly confirmed suspicions that Qatar may have been involved in buying votes during the bidding process.

Meanwhile, in more bad publicity for FIFA, a book expanding on the various reports and claims of corruption made by The Sunday Times has been released today.

The book titled, 'The Ugly Game: The Qatari Plot to Buy the World Cup' contains evidence allegedly showing the extensive bribery and corruption that went on behind FIFA's closed doors.

Another day, another story of #FIFA corruption. The gift that just keeps giving. Report from @owen_g http://t.co/7RBMfDiWqX

Despite allegations of corruption, FIFA have stood by its decision to award Qatar the hosting rights for the 2022 world cup.

As a self-regulated entity, FIFA's ethics committee undertook its own investigation into allegations of vote-buying in the lead up to the announcement of the 2018 and 2022 host nations, with many commenting that a FIFA ethics committee was a contradiction in itself.

© AP Photo /
A Culture of Corruption: is it Time for FIFA to Hang Up its Boots?

Despite the evidence, American lawyer Michael Garcia, who was tasked with compiling the investigation, said he would not consider the contents put forward by the Sunday Times, drawing more ire from the international football community.

However, to make things even messier, following the release of FIFA's report — which found no evidence of wrongdoing on behalf of Qatar's bids — Mr Garcia publicly denounced the findings, saying that the report contained "numerous materially incomplete and erroneous representations," that misinterpreted his research, creating a further farce for FIFA.

'Sweep a Broom Through It'

With the plethora of corruption allegations seemingly tarnishing the reputation of FIFA — and world football — a new campaign has started to try and reform the organization, and to change its practices and tarnished image into one of credibility.

The 'New FIFA Now' campaign, headed by a coalition of government officials, sponsors and others interested in football is calling for an increase in transparency and accountability regarding the decisions FIFA makes and aims to place pressure on sponsors, governments and broadcasters to withdraw their funding from the organization if changes aren't made to current practices.

Spokesperson Bonita Mersiades says central to the proposed changes to FIFA would be the formation of an independent reform committee, which would "sweep a broom through it and start again."

"[We would] hold new elections and then we've got a new FIFA basically. For people who are on the FIFA executive [board], even if they've been there for a relatively short time, they haven't stood up and said anything; they're all too scared as there's a culture of silence."