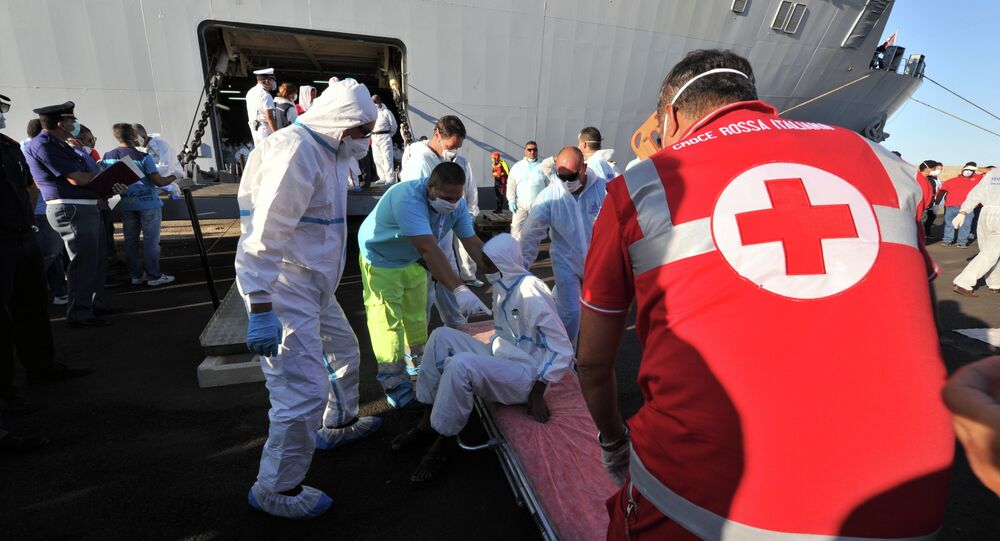 Amnesty International blamed the European Union for decision to cancel Mare Nostrum, the Italian Navy’s humanitarian search and rescue operation, contributed to the dramatic increase in the number of migrant deaths in the Mediterranean Sea.

© Photo : Screen grab from Sky News
Over 198,000 People Call on EU to Restore Rescue Operation in Mediterranean
MOSCOW (Sputnik) — An EU decision to cancel Mare Nostrum, the Italian Navy’s humanitarian search and rescue operation, contributed to the dramatic increase in the number of migrant deaths in the Mediterranean Sea, a leading human rights watchdog said on Wednesday.

“While the end of Mare Nostrum has not led to a drop in departures, it can however reasonably be linked to an increase in deaths at sea,” Amnesty International said in a briefing.

According to the watchdog's calculations, the death toll in the Mediterranean in 2015 is 100 times greater than in 2014, amounting to as many as 1,700 victims.

© AFP 2021 / FETHI NASRI
Italy Needs to Improve Migrants Reception, Rules Out Naval Blockade
The watchdog stressed that Triton is tasked with patrolling borders, rather than with open-sea search and rescue, and its contribution to rescue operations remains insufficient. Triton is active only within 30 miles of the Italian coast, while Mare Nostrum operated in international waters.

Amnesty International called on the EU authorities to “urgently deploy more resources in the context of a European multi-national humanitarian operation dedicated to assisting refugees and migrants in peril in the central Mediterranean.”

The briefing was published ahead of the Thursday emergency summit in Brussels on the Mediterranean migrant crisis. The meeting comes less then a week after a boat with migrants capsized on Sunday while heading from Libya to Italy, leaving up to 800 people dead.

How do you think the Mediterranean migrant crisis should be handled?
Voted: 2
All polls
On Monday, the online petition “Stop the deaths at sea now!" was launched by Tareke Brahne, who migrated from Eritrea to Italy in 2005. The petition, urging the European Union to "restore a robust operation of search and rescue” in the Mediterranean Sea, has gathered more than 290,000 signatures by Wednesday.

The Mediterranean is one of the main routes for migrants fleeing conflicts in North Africa and the Middle East. Due to current instability in the region, the number of asylum-seekers has increased dramatically. According to the UN Refugee Agency, the amount of migrants arriving to Europe by sea has increased by 60 percent in the beginning of this year compared to January 2014.

At least 3,500 people died crossing the sea in 2014, according to the United Nations estimates.