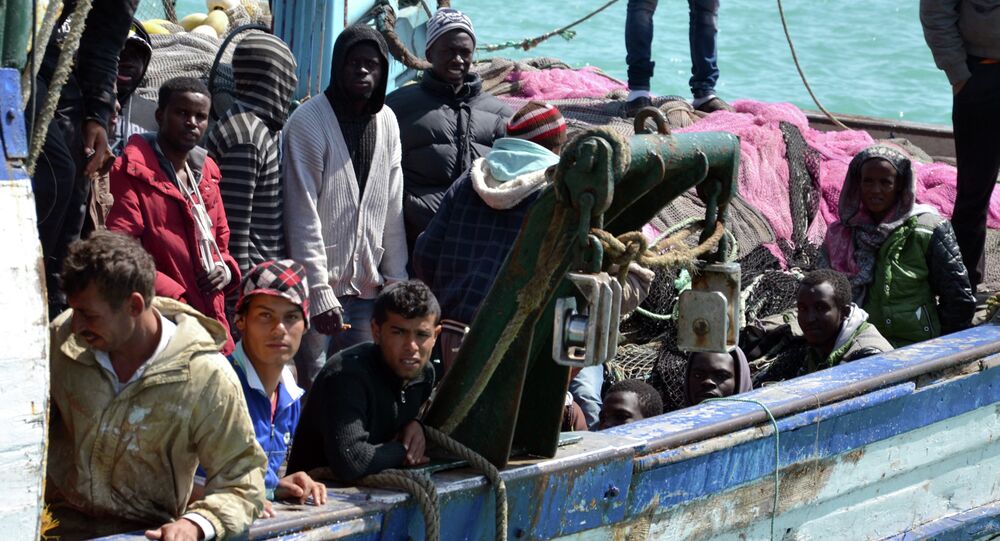 The president of the Italian Red Cross Francesco Rocca said that the organisation is actively involved in assisting arriving migrants. In Sicily, dozens of volunteers, mediators, staff and also a psychological support are alerted.

A major tragedy that has reportedly claimed the lives of up to 800 African migrants took place on Sunday, when their boat capsized and sank in the Mediterranean. Only 28 people have been rescued.

"We have a reception problem. If nothing is done to root to address the problem, the flow [may] become unstoppable. The naval blockade? For me it would not be a solution," Rocca said in a statement emailed to Sputnik.

© AP Photo
Gun Fire on ‘Mediterranean Graveyard’ in Human Cargo Boat Battle
Soon after the tragedy, Italian Prime Minister Matteo Renzi ruled out the possibility of a naval blockade off Libya's coast, despite calls by some Italian lawmakers.

A lack of European resources to react adequately with the soaring number of incoming refugees has already been admitted by a number of top EU officials. On Monday, EU foreign and interior ministers discussed a 10-point action plan on migration envisaging reinforcement of the EU Joint Operations in the Mediterranean.

"We are present in all ports assisting migrants. We cooperate for the first reception. In Sicily, dozens of volunteers, mediators, staff and also a psychological support are alerted. Now we are waiting for 28 survivors and we are ready to provide everything they need," Rocca explained.

How do you think the Mediterranean migrant crisis should be handled?
Voted: 2
All polls
The European Union lacks a joint rescue mission in the Mediterranean after Italy's "Mare Nostrum" program was scaled back in October 2014 due to insufficient financial resources. A joint operation "Triton" was subsequently established by the EU agency for external borders Frontex. However, it cannot be seen as an alternative for Mare Nostrum, as it is a border guarding mission active solely within 30 miles off the Italian coast.

Sunday's tragedy spurred heated public debate of the African migrants issue in Europe. The motion by EU ministers on Monday gained full support and will be further considered at the extraordinary European Council meetings on Thursday.

The Mediterranean is one of the main routes for migrants fleeing conflicts in Africa and the Middle East. Due to current instability in the region, the number of newcomers has increased dramatically. According to the UN Refugee Agency, the amount of migrants arriving to Europe by sea has increased by 60 percent in the beginning of this year compared to January 2014.