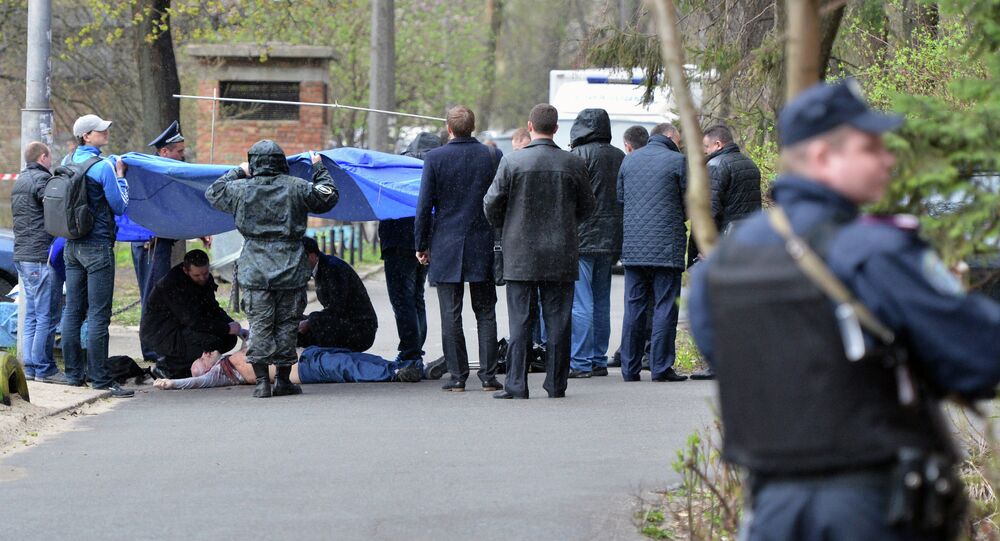 © REUTERS / Stringer
Dancing on Grave: Ukrainian Politicians Gloat Over Murder of Journalist Buzina
Appearing on the seemingly ironically titled program Svoboda Slova ('Freedom of Speech') on Ukraine's ICTV, Vovk stated that "I think that in our time, when there is practically a war going on, Ukrainophobes, if they don't shut their mouths, should at least stop their rhetoric. I think that in the present situation, there shouldn't be anyone stepping out directly against Ukraine and Ukrainianness."

The official warned that in the event that the 'Ukrainophobes' do not listen to him, "nothing good will come of it," adding that he says this "as the head of the Investigative Office of the Ukrainian Security Services."

Asked whether his office had developed a scientific or legal definition of 'Ukrainophobia', Vovk answered "no, but everyone knows what we're talking about."
Commenting on the murders of opposition politician Oleh Kalashnikov and journalist Oles Buzina, the chief investigator stated that each case had "an economic component."

Vovk added that "with regard to the journalist Buzina, I would say that for me as an investigator, the same as for journalists, it can't be that one doesn't have enemies. Make your conclusions for yourselves, but I think those who committed these crimes will be found." The investigator also stated that "foreign agents" may have been involved in the killings.

The night before, following the claims of responsibility for the killings by a group calling themselves the Ukrainian Insurgent Army (UPA), Vovk had stated that the UPA "does not exist," and that furthermore, "the Ukrainian Security Services (SBU) has no information about the existence in Ukraine of radical right organizations, parties or groups."

© Sputnik .
Murdered Ukrainian Journalist, Ex-MP Were in ‘Enemies of State’ Database
Earlier this week, Ukrainian and Russian journalists revealed that less than 48 hours before the murders of both Kalashnikov and Buzina, their names had appeared on a Ukrainian blog called 'Mirotvorec' ('Peacekeeper'), which published their personal details, including addresses, links to social media accounts, and mentions of the persons in the media. The site categorizes the people it writes about with labels such as "terrorist," "supporter of federalization," and more. Interior Ministry Advisor Anton Gerashchenko has praised the website, which he said helped disseminate information about the "terrorists" and "separatists."

Earlier this month, SBU head Valentin Nalyvaichenko stated that the security agency should be reformed along the lines of the security services of the Ukrainian Insurgent Army, a group of paramilitaries which operated in Poland and the Soviet Union in the 1930s, 1940s and 1950s. Nalyvaichenko commented that the organization worked effectively against an aggressor under conditions of occupation, had a patriotic education, and enjoyed the support of the population. What left out was that the organization's methods also included brutal forms of torture and murder, as well as a policy of mass extermination against 'Ukrainophobes' and 'enemies of Ukrainianness', including the massacre of up to 130,000 Poles in Volhynia and Eastern Galicia, along with thousands of Russian and Ukrainian civilians.

© Sputnik / Sergey Kozlov
Murder And Mayhem: Three Prominent Poroshenko Critics Killed in Kiev in Three Days
Last week saw the killings of at least four well-known opposition figures in Ukraine. The first occurred on April 13 when journalist Sergey Sukhobok was murdered. This was followed by Kalashnikov’s death two days later and Buzina’s the day after that. The latest murder was committed Thursday when journalist Olga Moroz, the editor-in-chief of Ukrainian newspaper Neteshinskiy Vestnik, was found dead in her home.
...
Reddit
Google+
Blogger
Pinterest
StumbleUpon
Telegram
WhatsApp
931