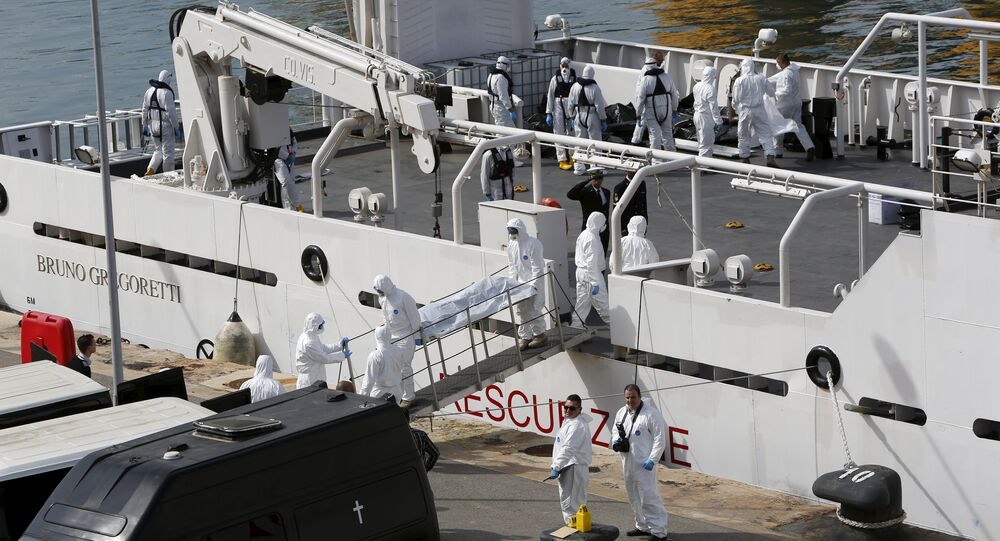 At least three people have been killed after a boat carrying dozens of migrants ran aground off the Greek island of Rhodes, the BBC reported Monday citing the Greek Coastguard.

© AFP 2020 / MV PINAR E CREW / UNHCR
Capsized Boat Might Leave Up to 700 Migrants Dead off Libyan Coast
MOSCOW (Sputnik) – In a related story, the BBC reported that the International Organization for Migration (IOM) received a distress call from a sinking boat with 300 migrants, some 20 of whom are reported dead, in the Mediterranean Sea.

The latest incidents come as the search continues for hundreds of migrants, who are feared drowned after a third boat capsized off the Lybian coast in the Mediterranean on Sunday.

"That response has got to include targeting the criminals who are managing this traffic in human suffering. We have got to tackle them, we have got to work upstream in the countries from which these people are coming and we are determined to put an end to this vile trade," Hammond was quoted as saying by the British media.

Italy has called for a radical solution to the crisis as EU foreign and interior ministers meet in Luxembourg on Monday to discuss ways to prevent more migrant deaths of those seeking escape from Northern Africa.

"We demand from Europe to approach the Libya issue much more seriously than before. This issue must be resolved radically," Italian Prime Minster Matteo Renzi told the RTL radio.

The Italian prime minister ruled out a possibility of a ground military operation in Libya in the near future.

Libya has been in a state of a violent crisis since 2011 following the Arab Spring protests and civil war that led to the ousting of the country's long-term leader Muammar Gaddafi. The second Libyan civil war began in May 2014.

Meanwhile, Spanish Foreign Minister Jose Manuel Garcia-Margallo said that Spain was planning to submit a statement on the migrant crisis to the UN Security Council.

Garcia said that Libya was Spain's top concern as the Libyan crisis could affect the whole of Northern Africa and lead to mass migration of Libyan citizens.

During the first three months of 2015 at least 486 asylum seekers drowned in the Mediterranean, a figure 10 times higher than the same period last year, according to IOM estimates.

According to the UN Refugee Agency, more than 218,000 people crossed the Mediterranean by irregular routes in 2014 and at least 3,500 died in the attempt.