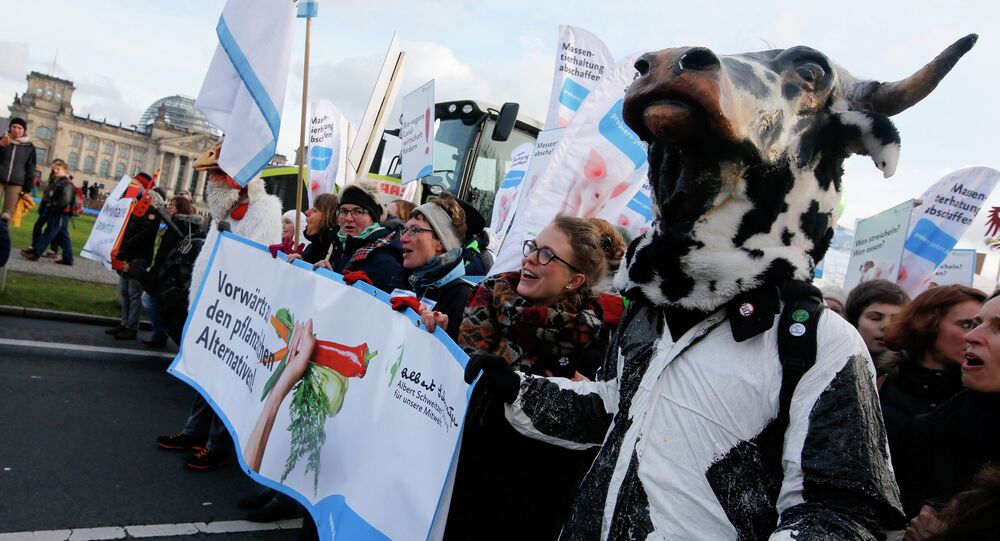 The series of protests against the TTIP held across Europe and in other locations around the world on Saturday point to the need of civil society involvement in the negotiations on the free trade agreement between the US and the EU.

MOSCOW (Sputnik) – Ulrike Lunacek, head of the delegation of Austrian Greens in the European Parliament (EP) and Vice-President and foreign affairs spokesperson of the Greens/European Free Alliance (EFA) in the EP called on her website on Saturday "to examine whether all TTIP negotiating texts can be made publicly available."

© Flickr / World Development Movement
TTIP Would Boost Corporate Power Over States, People – Spanish Party
Along with Michel Reimon and Monika Vana, two other members of the EP from the Group of Greens/EFA, Lunacek stressed that the European Commission needs to set up a transparent process of negotiation on the free trade deal, saying that, as of now, the TTIP is a "serious attack on democracy" that threatens social standards.

According to Reimon, resistance to the TTIP is growing not only among the public, but in the European Parliament as well.

"The European Commission must take note that the time has passed when such far-reaching agreements without the involvement of civil society could be rushed through," Reimon said as quoted on Lunacek's website on Saturday.

Lunacek pointed out that despite the clear signs of public disapproval of the EU-US free trade deal, evidenced by the Saturday protests, the European Commission is not rushing to reduce "obscurity" in the TTIP negotiation process.

© Flickr / Garry Knight
Free Trade Deal With US Would Undermine Europeans’ Rights - Parliamentarian
Meanwhile Vana, who took part in the Saturday protest action, said that her conversations with activists highlighted the urgent need of civil society involvement in the process.

"The quality of care and security of the citizens must have the highest priority," Vana stressed, as quoted on Lunacek's website on Saturday. Lunacek herself warned that the TTIP threatens European standards in social, privacy and environment spheres.

The TTIP is currently in the stage of negotiations. Advocates of the deal say it could benefit economic growth in both the United States and the European Union, while opponents argue that it will make it more difficult for Europe to regulate markets.

A series of protests against the free trade agreement took place around Europe on Saturday. Reportedly, 15,000 people took part in the rallies in Austria's capital Vienna, out of the total of 22,000 people claimed to have shown up by the organizers, who also estimated that 3,000 protested in Salzburg, 2,500 in Linz and 1,500 in Graz. Anti-TTIP demonstrations were also held in several other Austrian cities.

© AFP 2020 / TOBIAS SCHWARZ
Some 22,000 Participated in Anti-TTIP Protests Across Austria – Organizers
Protesters in Austria used slogans like "Democracy is no trading stock" and "Consolidated power endangers human rights" on their banners.

Similar protests took place in dozens of cities across Europe, attracting tens of thousands of people.

In Germany, where opposition to the TTIP is particularly high amid increasing anti-American sentiment linked to revelations of US spying on German Chancellor Angela Merkel, police estimated that about 600 demonstrators took part in protests in Berlin. Meanwhile the Attac Deutschland movement that coordinates anti-TTIP protests in Germany told RIA Novosti that there were some 4,000 protesters in Berlin on Saturday.

Overall, the Saturday demonstrations against the free trade deal covered over 700 locations globally. The largest Spanish demonstration took place in Madrid, with over 20,000 people having shown up, according to organizers.

Opponents of the TTIP argue that the free trade agreement will strip elected governments of their powers and place them in the hands of major corporations. Meanwhile the European Commission says on its website that the TTIP will help generate jobs and growth in the European Union and cut prices while providing a wider variety of goods. The US-EU free trade deal is also deemed to help Europe influence world trade standards and project its values globally.