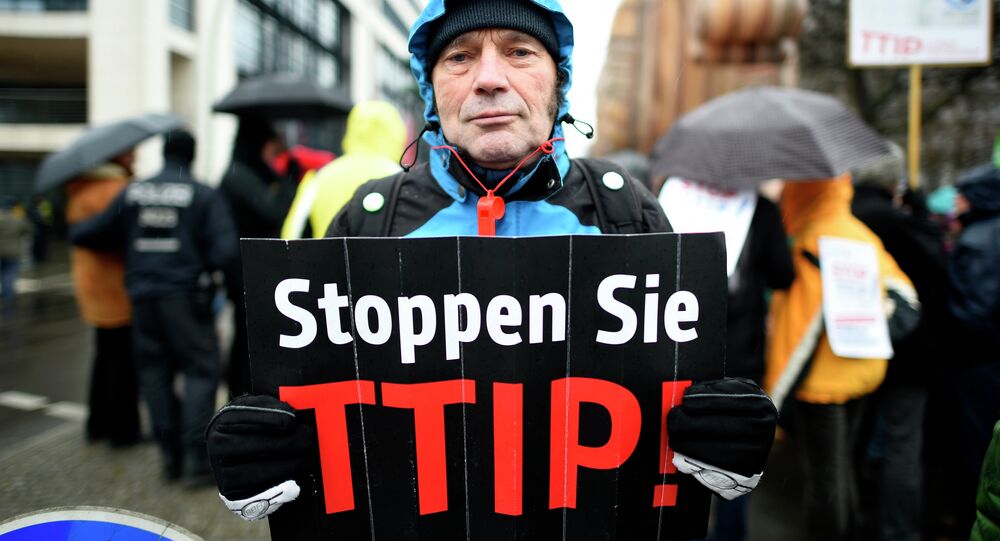 About 22,000 people participated on Saturday in protests against the US-EU free trade deal, the organizers said.

MOSCOW (Sputnik) — The Transatlantic Trade and Investment Partnership (TTIP) aims to ease trade barriers between the European Union and the United States, who are currently negotiating the agreement.

#munich and we are in the streets now marching against #TTIP #NoTTIP #StopTTIP #18ADoA #trade pic.twitter.com/auORQcfet3

According to the Der Standard newspaper, out of the total of the 22,000, reported by the organizers, 15,000 people took part in rallies in capital Vienna.

WOW: 20.000 citizens are in the streets for #A18DoA #StopTTIP throughout #Austria today!

The organizers reportedly estimate that 3,000 rallied in Salzburg, 2,500 in Linz and 1,500 in Graz. Protests were held in several other Austrian cities but the information on the number of participants there was not available.

Protesters in Austria used slogans like "Democracy is no trading stock" and "Consolidated power endangers human rights" on their banners.

Member of the European Parliament from Austria Ulrike Lunacek said on her website that the TTIP was a "serious attack on democracy" and a threat to social and environmental standards. She called for transparent negotiations on the deal.

No ifs or buts I'm a #StopTTIP candidate #VoteGreen2015 share if you want to say no to #TTIP https://t.co/t6k8Hvw7y6 pic.twitter.com/hiSNbwmuc9

Those in favor of the deal cite economic growth as the main upside of the partnership, while those opposed to the deal say it will only obstruct Europe's control over markets.

According to the European Commission, the TTIP will facilitate the creation of jobs and help reduce prices on goods. It is also expected to be used as the means to project EU values worldwide.