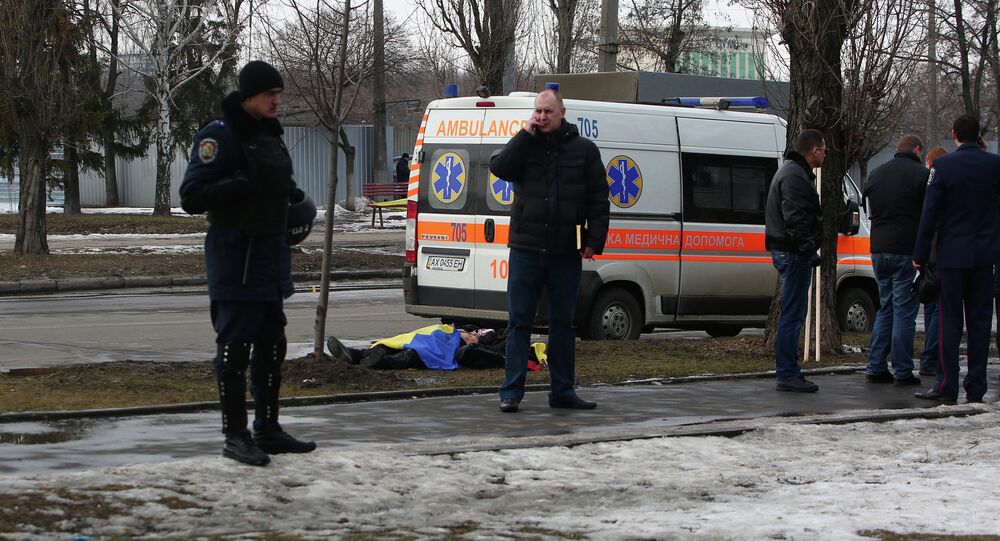 As the political situation in Ukraine destabilizes, the suspicious killings of prominent opposition supporters continue to transpire.

A prominent Ukrainian journalist, known for his critical views of Poroshenko's government was shot dead in Kiev on Thursday, in the latest series of suspicious deaths of opposition supporters.

© Sputnik / Alexey Kudenko
Journalist Oles Buzina Killed in Ukraine
Oles Buzina, 45, a supporter of ex-president Viktor Yanukovych, was shot in the street. Buzina's body was found on the ground nearing his apartment building close to the city center. The head of Kiev’s police department Alexander Tereschuk said that a TT gun was allegedly used in the crime.

According to the neighbors, the journalist was probably shot while jogging. He was found wearing a sports outfit. The 45- year-old was shot by two men in masks who disappeared from the crime scene in a Ford Focus car with either Latvian or Belarusian number plate.

Buzina was a columnist and editor of the daily newspaper Segodnya financed by Rinat Akhmetov, Ukraine's richest man and a leading sponsor of Yanukovych's Party of Regions. He was an opposition journalist, writer and TV host, well-known for his criticism of Poroshenko's goverment.

Earlier in Kiev, the murderers of Donetsk journalist Sergei Sukhobok were arrested on Thursday. The journalist was killed on the 13th April. He was one of the founders of the online media "Obkom" and “ProUA,” also known for his opposition to the current Ukrainian leadership.

© Photo : Oleh Kalashnikov's facebook
Former Ukrainian MP Assassinated in Kiev
Sukhobok was also the author of several hundred articles on socio-political, social, legal and economic issues. His works were published in many publications, particularly in the "Ukrainian Truth". For a few months in 2014, he worked in Donetsk.

Following this wave of brutal killings, Russia’s MFA spokeswoman Maria Zakharova said that this is, unfortunately, only the beginning of political purges in Ukraine.

“It is scary because none of the leaders in the EU will take notice that, day after day politicians are being killed in Ukraine. Let’s try and find at least 20 tweets of foreign ministers of Estonia, Lithuania, Latvia, Poland, Sweden, the UK, Canada, USA, and Australia, representatives of the OSCE, EU and NATO expressing concern over the killing of Ukrainian politician and condemning the situation in Ukraine.”

Just the evening before, Oleh Kalashnikov, a former Ukrainian MP and a vocal critic of the country’s ruling government was murdered on Wednesday in Kiev. The 52-year-old was shot dead at his residence in Kiev on Wednesday evening.

"West should pay attention to the political killings in Ukraine instead of the rhetoric of sanctions against Russia," said Konstantin Kosachev, the Head of the Federal Agency for the Commonwealth of Independent States.

"Terrible and bitter news came yesterday. Kiev regime has committed yet another shameful crime. Killed a prominent opposition politician Oleh Kalashnikov," Azarov wrote on his Facebook page, noting that the victim was" a true patriot of Ukraine "honest and a decent man."

The former Ukrainian Prime Minister appealed to the leaders of the Western countries, "because of your support in Ukraine there are political murders, terror taking place against political opponents, and all the people. What else should these Nazis do, for you to finally understand and be aware of your responsibility for what is happening now in Ukraine?” said Azarov.

Earlier three former lawmakers close to the ousted leader Viktor Yanukovych were found dead in Ukraine in February and March.