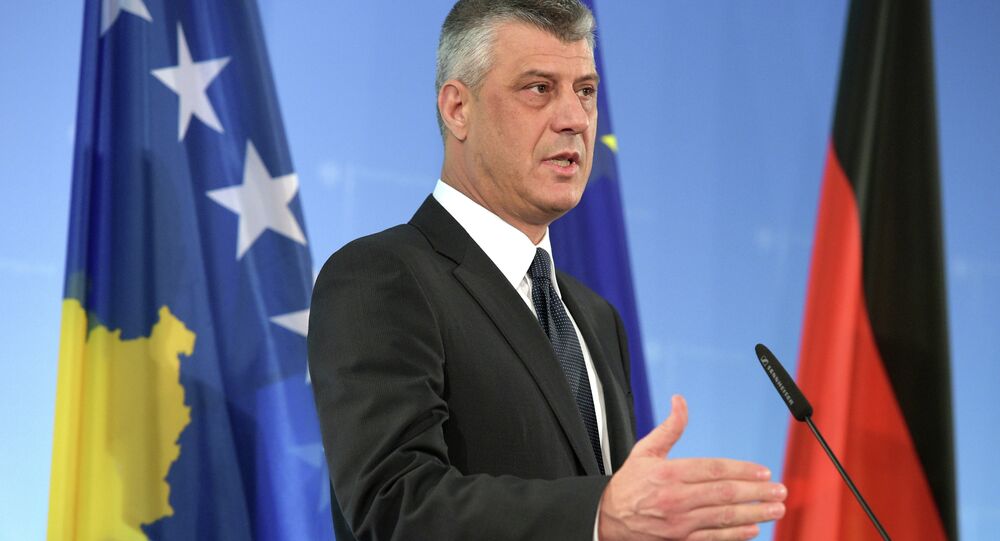 The already strained tensions between Serbia and its former province Kosovo have heightened after Belgrade announced it would arrest Kosovar foreign minister Hashim Thaci if he arrived in the country as part of a conference planned for next week.

© AP Photo /
Albania 'Banging War Drums' Over Kosovo Unification Claims
Thaci, who played an integral role in a guerrilla insurgency campaign against Serbia in the 1990s, has been invited to the April 24 reconciliation conference, organized by the Belgrade-based Youth Education Committee.

Despite Thaci indicating that he was considering attending the event, Serbian interior minister Nebojsa Stefanovic said that the Kosovo minister would be arrested over alleged terror offences if he steps on Serbian soil.

"If he turns up in Belgrade, the Ministry of Interior will act according to the law and bring him to justice," Stefanovic was quoted as saying by Serbian news agency Tanjug.

Thaci has been long accused of being a war criminal by officials in Serbia over his role in the Kosovo conflict on the 1990s, while he was also sentenced to ten years prison in absentia for "terrorism" offences, by Serbia, in 1997.

Stefanovic: We will arrest Taci if he comes to Belgrade: Serbia's Interior Minister Nebojsa Stefanovic said on… http://t.co/IDSemFpHPI

Thaci, now Kosovo's foreign minister, was the leader of the Kosovo Liberation Army that engaged in fighting with Serbian officials in the 1990s after various forms of passive resistance in the predominantly ethnic-Albanian province.

The armed conflict prompted Serbian forces to engage in counter-insurgency measures that resulted in the NATO bombing of Serbia in 1999.

Any potential arrest of Thaci would be a major dent in relations between Serbia and Kosovo, as Belgrade has never recognized Kosovo's independence as a sovereign nation.

© AP Photo / Darko Vojinovic
Serbia in Talks With Kosovo to Ease Relations, Not to Recognize State
Relations between the leaders were already tense following comments made by Albanian Prime Minister Edi Rama earlier this month, when he suggested that it was "inevitable" that his country would unify with Kosovo, who has an ethnic Albanian majority.

The dispute would also cause headaches for the European Union, who have been working towards trying to improve relations between Serbia and Kosovo, with both expressing an interest to join the bloc.