The Ukrainian side is proposing signing a plan on the withdrawal of tanks, mortars and guns with the caliber less than 100-mm from the contested village of Shyrokyne in eastern Ukraine, according to a press secretary for Kiev's envoy to the trilateral Contact Group on Ukraine. 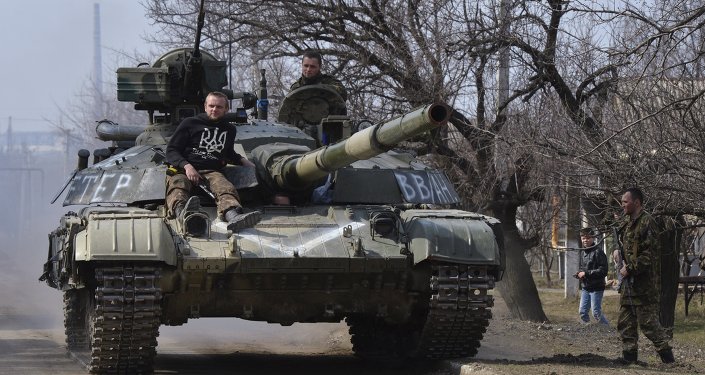 © REUTERS / Oleksandr Klymenko
Kiev Moves Military Equipment Closer to Donetsk - DPR
KIEV (Sputnik) — Kiev is urging the self-proclaimed Donetsk and Luhansk people's republics to sign a newly-proposed plan on weapons withdrawal and mutual pullout of troops from the contested village of Shyrokyne in eastern Ukraine, a press secretary for Kiev's envoy to the trilateral Contact Group on Ukraine said Tuesday.

"The Ukrainian side is proposing signing a plan on the withdrawal of tanks, mortars and guns with the caliber less than 100-mm as a follow up to the initiative adopted by the 'Normandy Four' foreign ministers at a meeting in Berlin on April 13," Dariia Olifer wrote in her Facebook blog.

"The Ukrainian side is also proposing demilitarization of Shyrokyne, or the mutual withdrawal of armed units from this town, as well as the mandatory presence of OSCE monitors there," Olifer wrote following a fresh round of teleconference talks between senior representatives from Ukraine, Russia, and the Organization for Security and Cooperation in Europe.

© AP Photo / AP Television
Donetsk Ready to Withdraw Tanks, Arms From Contact Line to Ease Tension
The East Ukrainian village of Shyrokyne has been the site of the latest large-scale clashes between Kiev-led forces and the militias.

The armed conflict in Ukraine has been going on for over a year. In April 2014, Kiev launched a military operation against independence supporters in the country's southeast.

The warring sides managed to reach two ceasefire agreements, yet accused each other of breaking the peace in both instances.

The latest ceasefire came into effect on February 15, after both sides to the conflict signed a document in Minsk on Ukrainian reconciliation. The document also stipulates prisoner exchanges and the pullback of heavy weapons.