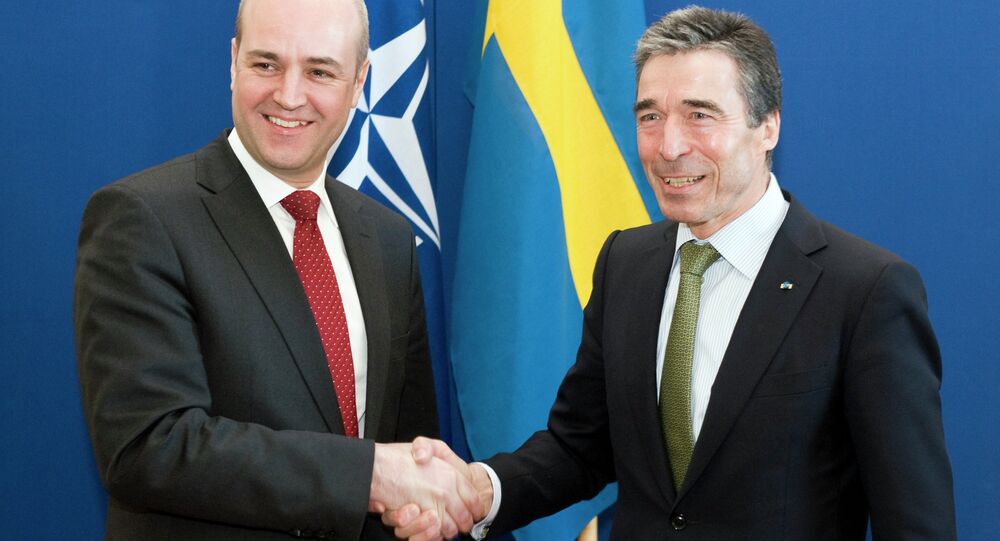 NATO's expansion closer to Russian border through Nordic states will not succeed due to the neutrality of Finland and Sweden, according to experts.

© AFP 2021 / Raigo Pajula
Estonian President Calls for Larger NATO Presence in Country
MOSCOW (Sputnik), Svetlana Alexandrova — The US-led NATO bloc is trying to expand through Nordic states, approaching the Russian border from the north, however, is unlikely to succeed due to the neutrality of Finland and Sweden, experts told Sputnik.

"NATO is trying to expand and move closer to the Russian border through Scandinavian states," Alexander Domrin, Professor at the Higher School of Economics, told Sputnik commenting on the joint declaration on the expansion of military cooperation that five northern European countries signed last week.

According to the declaration, five Nordic states, including Sweden and Finland, denounced "Russian aggression against Ukraine" and condemned a series of large-scale Russian military exercises in the Baltic and Arctic regions in 2014-2015, the Norwegian Aftenposten newspaper reported last week.

© Flickr / suviih
Poll Reveals Finns' Uncertainty Over Their Country's NATO Entry
Director of the Diplomatic Studies Program and Associate Professor at the Department of European Studies of the School of International Relations in Saint Petersburg State University Stanislav Tkachenko agreed that NATO is continuing to strengthen its position in northern Europe.

He emphasized that the alliance's prevailing strategy for Europe "consists of regular military exercises, as well as the rotation of different member-states' army units" stationed in different European counties, including Baltic states. The expert questioned the effectiveness of this tactic and described it as "military tourism."

According to Tkachenko, the joint declaration, signed by five Nordic states, is a sign of the alliance's desperation. European NATO members, concentrated on maintaining mutually beneficial business relations with Russia, understanding that tougher sanctions against Moscow would have a further negative impact on the European economy. "A military scenario can't be seriously considered by any sober-minded politicians in the NATO bloc," Tkachenko asserted.

© Sputnik / Maksim Blinov
Documents Reveal Covert US, UK, NATO Propaganda War in Ukraine
This gives rise to a situation where the official NATO's policy is often overridden by actions that give the appearance of strong-willed but which are, in fact, meaningless. "This declaration is one of them," he added.

The US-led NATO coalition wants to influence public opinion in its member-states, the expert argued, pointing out that the document is just a tool and "reflects the current stage of political and media anti-Russian hysteria among the allies."

Finland and Sweden are currently members of NATO's affiliate program known as the Partnership for Peace. Finnish President Sauli Niinisto announced last June that Finland and Sweden have made a joint proposal on collaboration with NATO.

Both experts agreed that NATO membership may become a reality for these two Northern European states, however, they stressed that such a move would require broad public debate within the countries.

© REUTERS / Ints Kalnins
Countries of N Europe Expand Military Cooperation Citing 'Russian Threat'
Sweden and Finland have become world leaders in terms of quality of life and the economic development due to their policies of non-involvement and military neutrality, pursued over the last two centuries, Alexander Domrin stated.

Moreover, an agreement exists between Finland and Sweden on the joint provision of military security. In reality this means that one of the countries cannot join NATO without the other doing so also. Stockholm, to date, has not expressed any desire to change its position of neutrality, rendering any Finnish thoughts of accession to NATO futile.

"Without Sweden willingness to join the bloc, Finland's position on the matter will remain unchanged," Stanislav Tkachenko stated, adding that there are several pragmatic reasons for this.

First of all, Finland's land border with another NATO member, Norway, is in the Arctic region and very narrow, therefore, accession to NATO is not strategically beneficial to Helsinki. Moreover, in the event of a large-scale military conflict, communication with NATO allies across the Baltic Sea will not be reliable," the expert added.

The experts concurred that Finland wishes to maintain good relations with Moscow, both within the framework of the EU and in a wider context of Russia-West relations, and would prefer to stay out of any open confrontation with Russia for as long as it possible.

© Flickr / Christopher Ebdon
Jet Near-Miss Over Sweden Likely NATO Warplane: Russia Defense Ministry
This northern state for long played the role of mediator between Moscow and the West. Helsinki cherishes its image as "an expert on Russia," which they actively create and support in the EU, Tkachenko asserted. "Accession to NATO will automatically deprive Helsinki of its mediator status and transform a peaceful Russian-Finnish border into the front line," he pointed out.

Russia's Foreign Ministry said on Sunday that moves by Finland and Sweden towards closer ties with NATO were of "special concern." In response, Finnish Prime Minister Alexander Stubb noted that, regardless of any third-party's concerns, Finland is independent in its policy-making, adding that he would like to see his country joining NATO, the public broadcaster YLE reported.

Russia and the West are currently experiencing their worst diplomatic relations since the fall of the Soviet Union. The United States and the European Union accuse Russia of "annexing" Crimea. It rejoined Russia in March, 2014, following a referendum in which 96 percent of participants voted in favor of the move.