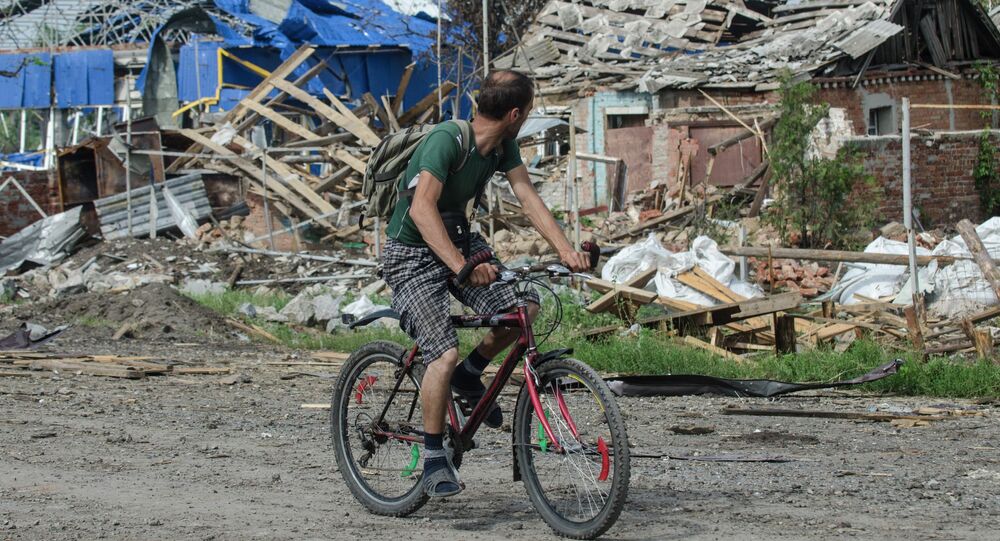 On April 13, 2014, Kiev decided to launch a military operation against independence supporters in eastern Ukraine.

© Sputnik / Evgeny Kotenko
Movement in Special Operation Zone in Donbas to Be Limited: Kiev Official
MOSCOW (Sputnik) – Exactly a year ago, on April 13, 2014, Kiev decided to launch a military operation against independence supporters in eastern Ukraine, who refused to recognize the legitimacy of the new government after the overthrow of sitting President Viktor Yanukovych in February.

The military confrontation claimed over 6,000 lives, including those of many civilians, according to the UN.

On February 22, 2014, Ukraine's one-chamber parliament, the Verkhovna Rada voted to impeach Yanukovych before announcing the next presidential election to be held on May 25. Oleksandr Turchynov was appointed Ukraine's acting president.

Some of the country's southeastern regions did not recognize the legitimacy of the new Kiev authorities. From March, proponents of the country's federalization started holding rallies in eastern Ukraine, specifically in Donetsk, Kharkiv and Luhansk, demanding referenda on the status of their regions. Such protests then spread to several other cities in the Donetsk region, including Slaviansk, Mariupol, Yenakiyevo and Kramatorsk.

On April 7, 2014, following the seizure of administrative buildings in Kharkiv, Donetsk and Luhansk, acting President Oleksandr Turchynov announced the creation of an anti-crisis headquarters, while also saying that "anti-terrorist measures will be taken against those who have taken up arms."

On April 13, the Ukrainian National Security and Defense Council decided to launch a full-scale operation with the use of armed forces.

On April 16, the First Reserve Battalion of the National Guard, which enrolled volunteers from the Maidan Self-Defense Force, was sent to the front line near Slaviansk, which was occupied by the Donbas People's Militia on April 12.

On May 2, an active phase of the special operation against pro-federalization supporters began in Slaviansk.

On May 25, a snap presidential election was held in Ukraine. 21 candidates stood for the presidency. The winner was Petro Poroshenko, with 54.7 percent of the vote.

On June 7, Petro Poroshenko was sworn in as president of Ukraine.

Within two weeks of Poroshenko's inauguration, combat operations in the Donetsk region spread from Slaviansk to the entire region, including Mariupol, Kramatorsk and Gorlovka.

Poroshenko vowed to put an end to the special operation shortly, and proposed a 15-point peace plan. The plan envisaged exemption from criminal liability for all those who agreed to lay down their arms and had not committed serious crimes, as well as the release of hostages. The plan also envisioned steps toward the decentralization of government, protection of the Russian language and amendments to the Ukrainian Constitution.

Poroshenko ordered a week-long ceasefire for all law enforcement, defense and security units involved in the special operation in the east of the country.

On July 4, Ukrainian security forces took control of several cities in the east of the country, including Slaviansk, Kramatorsk, Artyomovsk and Druzhkovka. The militia forces in the north of the Donetsk region retreated to Donetsk, Gorlovka and Snezhnoye.

In mid-July, in a bid to encircle the territory controlled by the self-defense forces (primarily Donetsk, Gorlovka, Makiivka and Luhansk) and cut it off from the Russian border, Ukrainian security forces established a 8-10 km "corridor" between the border and the militias. The offensive fell through due to fierce resistance from the militias. Several Ukrainian army units were encircled before running out of ammunition, food and water supplies.

In late July, after running out of ammunition and losing significant numbers of personnel, Ukrainian servicemen started crossing into Russia on a mass scale, fleeing militia fire. The biggest "exodus" came late on August 3, when a total of 438 Ukrainian servicemen asked the Russian Border Guard Service for asylum.

Following the security forces' retreat from the border, the self-defense forces tightened their control over the border in the Donetsk and Luhansk regions.

On July 17, Malaysia Airlines Boeing 777, en route from Amsterdam to Kuala Lumpur, crashed over Donetsk. All 298 people on board, including 193 Dutch nationals, were killed. The Kiev authorities accused the militia of shooting down the plane, while the militia said they did not have weapons capable of hitting the plane.

In late August, Ukrainian battalions were encircles near Ilovaisk in the Donetsk region, including the headquarters of the Eighth Army Corps, the 28th, the 30th and the 93rd Motorized Infantry Brigades, the 95th Airmobile Brigade, the Aidar, Donbas, and Shakhtarsk territorial defense battalions, attached to them, and the National Guard Azov and Dnepr battalions.

After days of encirclement, government forces reached an agreement with independence supporters, which allowed them to retreat from the besieged town.

On September 5, with Russian and OSCE mediation, the Kiev authorities and the self-proclaimed DPR and LPR signed a ceasefire protocol. The sides also reached an agreement on the withdrawal of heavy weapons, prisoner exchange and humanitarian assistance.

The intensity of hostilities somewhat abated but fighting and attacks continued in certain sectors.

Starting from September, several rounds of talks were held in Minsk between representatives of Ukraine and the self-proclaimed republics with OSCE and Russian mediation. The sides discussed a ceasefire and its monitoring by the OSCE, the withdrawal of heavy weapons from the line of demarcation between the security forces and the militias and the exchange of prisoners.

Early in 2015, the conflict in Donbas escalated. On January 18, 2015, Ukrainian forces intensified the shelling of Donetsk. Kiev officially recognized that it was conducting a massive special operation at the city's airport.

Moscow and the self-proclaimed republics repeatedly urged Kiev to comply with the Minsk agreements, which provided for a ceasefire and the withdrawal of heavy weapons.

On February 12, Normandy-format talks on the settlement of the Donbas crisis took place in Minsk with the participation of German, Russian, French and Ukrainian leaders. Consultations of the Trilateral Contact Group, including Russia, Ukraine and the OSCE, were held in the Belarusian capital.

Two documents were agreed on during the marathon talks.

The talks produced two documents. The first was the Package of Measures to for the Implementation of the Minsk Agreement, which envisioned a ceasefire and the pullout of heavy artillery from the line of contact to create a 50-150 km security zone. The Agreement also called for constitutional reform in Ukraine, including decentralization and the granting special status to Luhansk and Donetsk.

The second document was a declaration in support of the Package of Measures for the Implementation of the Minsk Agreement, which was adopted by the "Normandy-Four" leaders.

On February 17, the UN Security Council adopted a resolution in support of the Minsk Agreement to resolve the crisis in Ukraine.

Soon after the ceasefire was declared fighting resumed in Donbas, with both sides blaming each other and claiming they were only returning fire. Kiev is considering asking the UN and the EU to deploy peacekeepers in Donbas.

According to the United Nations, 6,072 people were killed as a result of the conflict in southeastern Ukraine and another 15,345 people were injured as of March 19, 2015.

More than 1.5 million people have been displaced.

According to President Poroshenko, 1,549 Ukrainian servicemen were killed during the special operation in Donbas, with 64 killed since February 15.

According to the Ukrainian authorities, over 14,000 militia members have been killed in the self-proclaimed republics.